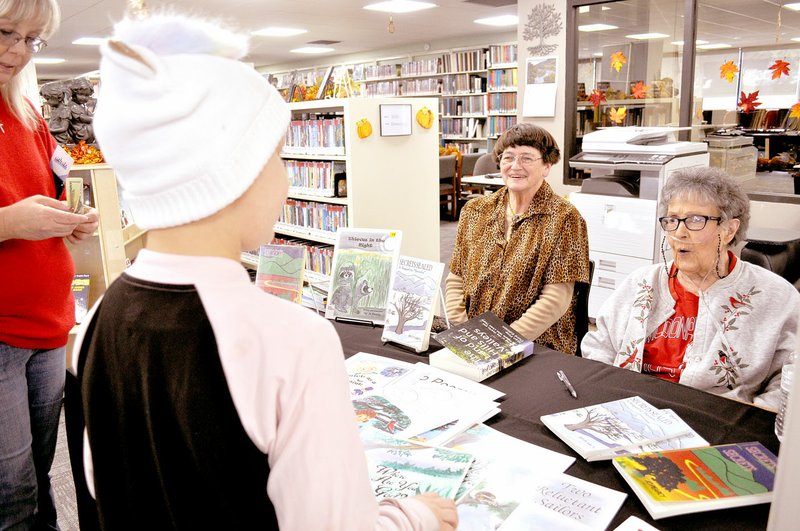 RACHEL DICKERSON/MCDONALD COUNTY PRESS Jo Pearcy (right) and daughter Judy Rickett talk with Lexi Most about a book she is purchasing at the local author fair at the McDonald County Library during the iWrite Celebration on Saturday.

The event included a local author fair at the library, recognition of the winners of the iWrite essay contest and an ice cream social.

Library director Amy Wallain was on hand at the library during the local author fair.

"As part of the iWrite Celebration, local authors are gathering at the library today," she said. "They brought their books. They're selling, they're signing, they're meeting the public. It's also a good time for them to network as well. Local authors meeting other local authors. We've had people coming in and out."

Author Randy Turner of Joplin brought a mixture of books, four of which were connected to the Joplin tornado, he said, and four novels. Turner was formerly a teacher in Joplin and Diamond and also formerly wrote for the Huffington Post for 22 years.

"I've met some nice people today," he said. "The library people have been great. Library people are always great, though."

Carol Klein of Jane, who owns a buffalo farm, brought her book, "Buffalo Children: How I Became a Buffalo Mother."

"I started writing my book 20 years ago," she said. "You get a different perspective 20 years later.

"I'm enjoying talking to everyone about our books," she said. "It's fun to have people be interested in what you're working on."

She said she had just given her contact information to a girl who had won second place in her division in the essay contest.

"If she contacts me and writes a book, that'll make me really happy," she said.

Fran Billings of Warrensburg, Mo., who has McDonald County roots, said she hopes to encourage others to write their own stories. She brought her memoirs, childhood memories from birth to 11 years old, coming from Morton County, Kan., to McDonald County. The memoirs include stories and fragments of stories she wanted to put on paper for her children, she said. She also brought her mother's memoirs.

"If you leave your memoirs for your children and grandchildren you have left your word, not someone else's word about you," she said.

Daisy Galbraith, who lives south of Joplin but grew up in McDonald County, also brought her memoirs. It is a story from about nine years old on Patterson Creek and the McMillan School in Coy, Mo., she said.

Jo Pearcy of Pineville is an author of many children's books. She was also a teacher for 25 years in McDonald County and has been retired for more than 25 years.

"I had to find something else to do, so this is it," she said.

She said she started reading some of her books again in preparing for the author fair and thought, "not bad."

One of her favorites is called, "Where Are You, God?" It is about two children who are looking for God, and they find him in nature. Pearcy also does her own illustrations.

Judy Rickett, Pearcy's daughter, said her favorite is "The High Rise," which is about a dead tree that still has a lot of life in it because so many birds, rabbits, raccoons, etc., live there.

At 3 p.m. Saturday, the winners of the iWrite essay contest were announced at the Pineville Elementary School cafeteria.

Third place -- Vivian Lopez, "I Survived the Train Explosion in Noel in 1969"