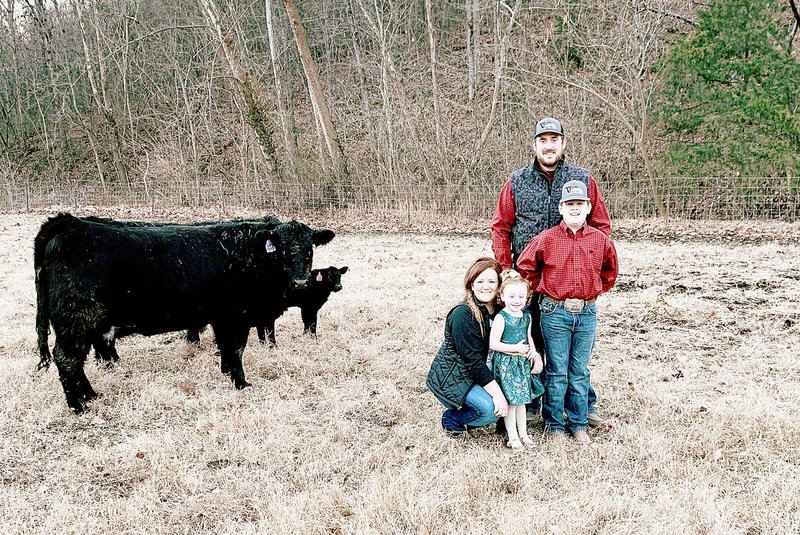 PHOTO SUBMITTED Tiffany and Ryan Lewis are pictured with daughter Payton and son Kole. They raise cattle on their farm in Pineville.

Ryan and Tiffany Lewis of Pineville both grew up on farms in McDonald County and now are carrying on the tradition on their own farm. They raise Limousin and cross-bred cattle.

"We got into the registered part of it when our son started showing cattle," Ryan said of son Kole, 12. The couple also has a daughter, Payton, 3, who looks forward to showing animals someday.

Tiffany said her grandfather had turkey houses and raised turkeys for 50 years going back to before turkey houses when people ranged turkeys. He also had cattle. Her parents have four chicken houses and also have cattle.

Ryan said, "In my family, we had cattle and worked in the hayfield in the summer. When I was in high school, I worked for Don Underwood and did farm stuff. Fed cattle, baled hay."

Both Ryan and Tiffany work full-time jobs in addition to their responsibilities on the farm. Ryan works for McDonald County Telephone, and Tiffany has a beauty shop on the property where their home is located.

Asked about the challenges of farming, Ryan said, "The expense is the biggest challenge. And the weather. Fuel, net wrap, equipment. It's just one thing after another."

"This last summer it's been so wet it's been great for growing grass but it's been a challenge to get it put up because of the rain," He continued.

Time is another challenge, he added, because they do work full-time jobs.

"We do a little custom baling for other people. Trying to do that and trying to keep show cattle up and take care of day-to-day stuff," he said.

Regarding the rewards of the trade, he said, "Calving season would be my biggest reward. I like to go to shows. We're competitive by nature."

Tiffany added, "We've met a lot of people (at shows). Made a lot of friends from all over. I would say that's our family vacations in the summer."

"It's a family deal," Ryan said of farming. "It takes all of us to get it done. Plus a couple of kids that come over after school. We've gotten into the registered Limousin; we've sold bulls around here. The farthest one I've sold has been to Tahlequah."

Tiffany said pretty much all of their family and a lot of their friends are in farming.