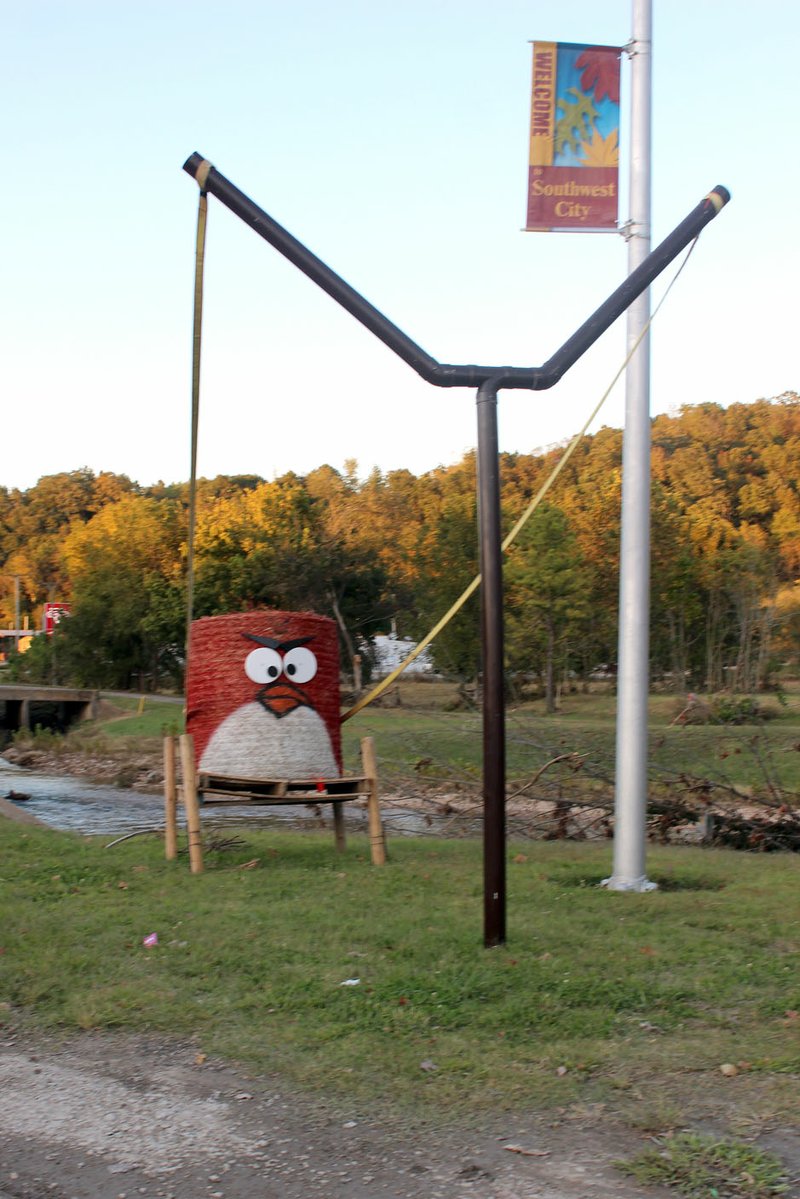 MEGAN DAVIS/MCDONALD COUNTY PRESS A scene depicted by SWC Tire involves three hay bales decorated as Angry Birds characters. One bird is staged across the parking lot, poised for takeoff in a slingshot, while another bird sits next to a pig awaiting destruction.

From Highway 43 to the heart of Main Street, festive -- and sometimes frightening -- decorated hay bales line the roadway in Southwest City. The second annual Hay Bale Contest has inspired almost two dozen businesses, churches and organizations to get creative and craft a one-of-a-kind hay bale.

Contestants approached the task with a variety of strategies. Some bales play off the organization, such as the PTO's Indian mascot or the senior center's ball of yarn, while others tackle topical themes, such as SWC Tire's Angry Birds setup. Regardless, each entry exhibits a seasonal, spooky, or silly spirit.

The contest is hosted by the Old Timer's Day Committee, which contacts businesses, churches and organizations along Main Street and supplies a hay bale to those interested. The bales are delivered on Friday and participants are given until Monday to style their bale.

The public is invited to view the bales, in-person or online, and vote for their favorite entry. Votes are submitted by "LIKE"ing the designated photo of the hay bale on the Southwest City Facebook page. At the end of Friday, Oct. 25, votes will be tallied and, the following day, the winners will be announced.

The Hay Bale Contest began last year after Wetzel decorated a handful of hay bales and placed them around town. After receiving positive feedback from the community, Wetzel researched and found that county fairs were holding hay bale decorating contests. With strong agricultural roots in the community, she thought the idea represented Southwest City well.

"We're a farming community," she said. "It's nothing to see tractors driving down Main Street or people hauling hay across town."