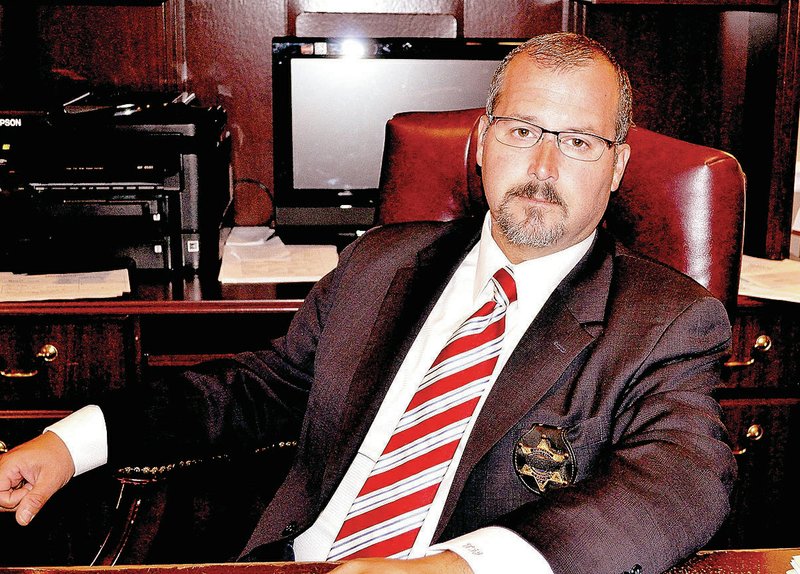 Rachel Dickerson/McDonald County Press File Photo William "B.J." Goodwin III serves as McDonald County Coroner. The coroner's position is one that keeps Goodwin stretched from one end of the county to the other. From the corner of Southwest City to a spot near Wheaton, McDonald County is a large area to service, Goodwin said. He tries to respond to any situation within 30 minutes, he added. His office is based at the Ozark Funeral Home in Anderson.

William "B.J." Goodwin III has carved out a career by helping others. The McDonald County Coroner, now in his third term, doesn't golf or fish. He enjoys going to the lake during his rare time away. Otherwise, he constantly cares for families and their loved ones.

Goodwin's office is located at Anderson's Ozark Funeral Home. He recently purchased his 10th funeral home, serving people in Joplin, Sarcoxie and Monett -- all in an 80-mile radius.

The county coroner's job isn't one many people want to pursue. For Goodwin, who has been involved with death care his entire life, the job helps provide comfort and closure to others.

"Nobody likes to think of a coroner, and what a coroner does," he said. "I am fortunate to have a good group of deputy coroners who assist me daily that I rely on to represent the office well."

Goodwin is a graduate of Webb City High School and attended the Mid-America College of Funeral Service in Jeffersonville, Ind., where he received his degree in mortuary science.

The coroner's position is one that keeps Goodwin stretched from one end of the county to the other. From the corner of Southwest City to a spot near Wheaton, McDonald County is a large area to service, Goodwin said. He tries to respond to any situation within 30 minutes, he added.

New technology has enhanced his job. A new system of electronically filing death certificates in Missouri has streamlined the process of inputting vital information, he said.

The job is challenging and the hours are long. But Goodwin believes he can make a difference by comforting families during their trying times.

As county coroner, Goodwin's experiences run the gamut. Some situations are more complex than others. One recent incident involved the disappearance of 25-year-old Jessica McCormack, who was later found alongside Highway 59 between Lanagan and Noel. Though Goodwin said he can't speak about the ongoing investigation, Sheriff's Office reports say that McCormack was found in a suitcase and identified through dental records.

Then, there are other instances such as wrecks, drownings and a range of situations that are difficult to handle and process. The line of work is commonplace for Goodwin, however, who has worked in death care since he was 15. He plans to seek a fourth term as coroner.

The work is continuous, without many breaks. Will retirement ever be an option?

"One day," Goodwin said. That might happen in 25 years, he adds.

For now, however, he plans to keep serving McDonald County neighbors with care and compassion, during their time of need.