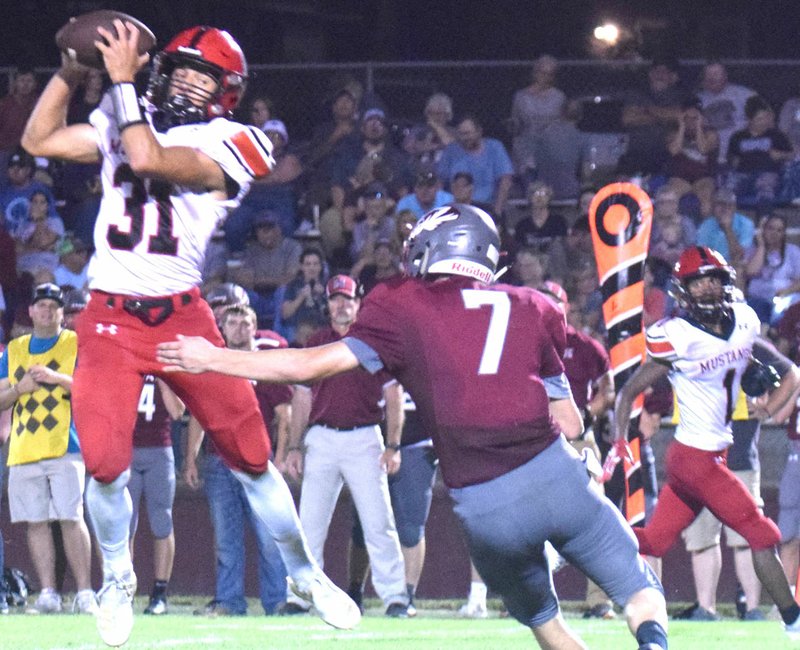 The McDonald County High School football team's problem with slow starts was solved on Friday night at Nevada -- at least for one game.

McDonald County jumped out to a 7-0 in the first four minutes of the game and led 21-0 at half on the way to a 35-0 win over the Tigers at Nevada High School.

"It was really good to see from our kids," said coach Kellen Hoover of the quick start. "We have been battling some things. We have played well, but we would make a big mistake. It was to the point where it was almost like we were waiting for it to happen. Tonight we kind of took control of the game at the start. It looked like everyone wanted to make a play."

McDonald County received the opening kickoff but failed to pick up a first down. However, after losing the kicking game last week, McDonald County's Bailey Lewis boomed a 43-yard punt with no return that pinned Nevada back to its own 13-yard line.

On second down, Levi Helm forced a fumble that Kaidan Campbell recovered at the Tiger 12-yard line.

From there Jack Teague carried four straight plays, including a three-yard touchdown on fourth and one. Jared Mora's first of five extra points gave McDonald County an early 7-0 lead.

The teams traded punts on their next possessions before McDonald County put together a 10-play drive that covered 70 yards to take a 14-0 lead.

Lewis, filling in for an injured Junior Teriek, gained 18 yards on the first carry to get the drive started. Cole Martin then completed two consecutive passes -- the first to Trent Alik for six yards and the second to Keegan Driscoll for 16 yards. Teague carried for eight yards, but a holding penalty negated a McDonald County apparent first down inside the five.

Facing a third and 12 from the Nevada 34-yard line, Martin found Alik open over the middle for 24 yards and a first down just inside the 10. Teague gained two yards on first down before Martin hit Levi Malone for an eight-yard touchdown pass to give McDonald County a 14-0 lead with 4:26 left in the first half.

Malone also played a big role in the Mustangs' next touchdown, but this time it was on the defensive side of the ball.

The sophomore receiver/defensive back intercepted a Nevada pass on the Tigers' ensuing possession to give McDonald County the ball on the Tiger 24-yard line.

"We started a little slow on our first two drives, but once we found our stride, it was just stick to the game plan and execute," Hoover said. "The defense played really well and got us a couple of turnovers in the first half. We held them to under 200 yards for the game, and we have seen on film how they can move the ball on people."

Nevada took the second-half kickoff and put together its best drive of the night only to see it stall after 13 plays on the McDonald County 24-yard line.

The Mustangs covered those 76 yards in just five plays. Martin completed two passes for 54 yards -- one to Malone for 17 and one to John Howard for 37 to key the drive. Teague capped the drive with an eight-yard touchdown run. Mora's extra point with 1:53 left in the third quarter gave McDonald County a 28-0 lead.

McDonald County forced a three and out on the Tigers' next possession with the offense taking over on the Mustang 39-yard line.

McDonald County put together a nine-play drive and overcame two holding penalties to increase its lead to 35-0 with 6:42 left in the game.

Nevada again failed to pick up a first down before McDonald County ran out the clock on its last drive.

"I was really happy with how hard our kids played," Hoover said. "We were in attack mode all night. Jack (Teague) and Bailey (Lewis) traded out possession at running back and both ran the ball really well. Cole (Martin) completed passes to seven different receivers -- just a great night."

Lewis finished with 91 yards on 14 carries, while Teague had 74 yards, also on 14 carries. Martin completed 12 of 15 passes for 182 yards and three touchdowns. Alik led the receivers with four catches for 49 yards while Malone (25 yards) and Williams (32 yards) had two catches each. Omar Manuel (16 yards), Driscoll (16 yards), Howard (37 yards) and Eliam (seven yards) caught one pass each.

Nevada finished with just 170 total yards, all but two on the ground.

McDonald County improves to 2-3 for the season heading into its Oct. 4 game against Cassville at MCHS. Kickoff is at 7 p.m.