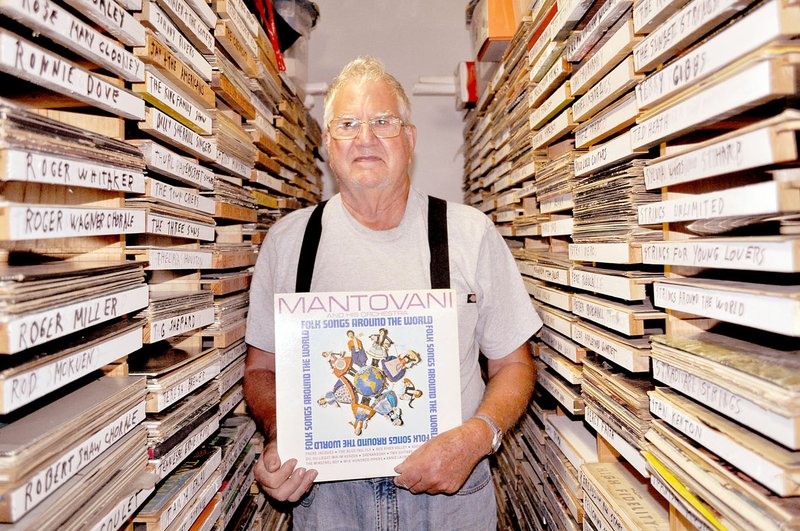 RACHEL DICKERSON/MCDONALD COUNTY PRESS Ed Malcolm of Pineville has been collecting records for 50 years and owns 8,000 albums. He is pictured on Sept. 9 among his custom-made shelves full of records.

Ed Malcolm of Pineville has an extensive record collection with 8,000 albums in it.

He has been collecting records for 50 years or more but says he never really got serious about it until 20 years ago. A lot of them have been given to him, and others he purchased second-hand at low prices.

"I have a lot that could be valuable if the right person got ahold of them," he said. "A lot of people who collect want the cover to be perfect."

He said he collects them to listen to them and for the joy of discovering ones he does not have. He noted he has duplicates of some of the records. At least 1,000 of them are duplicates. Some of the records he has three or four copies of.

He seldom collects anything new. His oldest records are 60 years old or older. He has a lot of 78s that date back to the 1920s. They are primarily orchestras.

"There were some fabulous musicians back then," he said. "Finding a record player that can play the 78s is hard. Luckily, I have one."

Malcolm has more than 1,000 groups and individuals in his collection. He has a lot of artists that only made a few records and a lot that made many. He has a "super wide variety" of genres, he said. He is particularly fond of folk music and orchestras.

He has 40 feet of custom-made shelving units that are almost seven feet tall, all with adjustable shelves. The records are arranged by genre and in alphabetical order. The genres include vocal, folk music, older country, instrumental, jazz and big band, orchestra, Dixieland, honky-tonk, bluegrass, comedy, miscellaneous, and miscellaneous artists of the 1930s, 1940s, 1950s and 1960s.

"We play records all the time," he said. "I leave a record player at the nursing home in Anderson. My wife was there almost a year."

He said his children cannot remember a time in their childhood years when there was not music in the house.

Malcolm said many of his records were given to him, while others he purchased at Helping Hands or Goodwill for 50 cents or a dollar. The last place to look is at a flea market, he said, because records there could be priced at up to $6. The most he has paid for a record is $3, he said.

A lot of his folk albums are autographed.

"That doesn't make them any more valuable to anybody but me," he said.

He has autographs from the Kingston Trio; Peter, Paul and Mary; The Brothers Four and The Lettermen.

He has some rare albums as well. He has one that is the first record Reba McEntire made when she was a teenager, he said. The record was not for sale but went to radio stations. The record was given to him, he said. He read about its history in a book, he noted.

Another rare album he has is one of only 1,000 copies made. In 1965 trumpet player Al Hurt put together a Christmas record, and they were given out randomly to shoppers at a large department store.

Malcolm said he has had a lot of fun with his hobby. This fall he plans to have a record sale and clean out his collection a bit. He plans to give the proceeds to the Pineville First Baptist Church youth group.