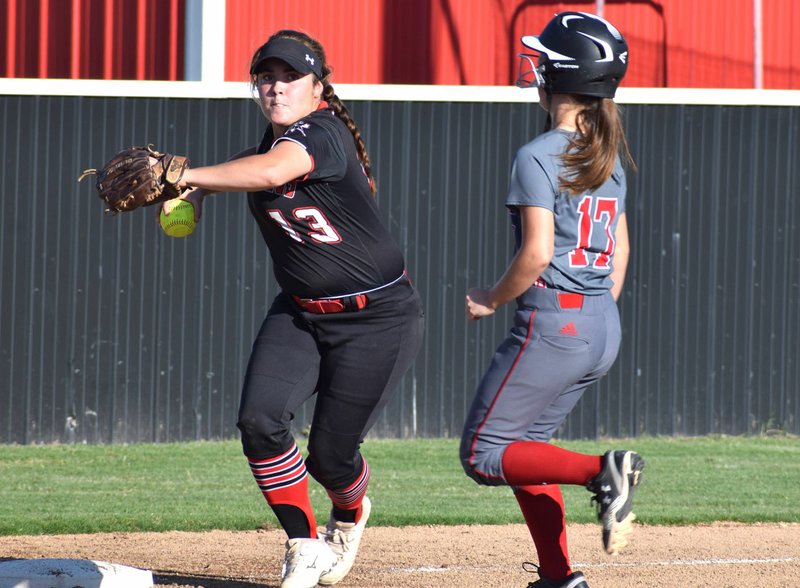 RICK PECK/SPECIAL TO MCDONALD COUNTY PRESS McDonald County third baseman Whitney Kinser throws to first to complete a double play after forcing out a Lamar runner during the Lady Mustangs' 3-1 win on Sept. 30 at MCHS.

Alexa Hopkins pitched a three-hitter and Whitney Kinser hit a three-run homer to lift the McDonald County Lady Mustang softball team to a hard-fought 3-1 win over Lamar on Sept. 30 at MCHS.

McDonald County trailed 1-0 going into the bottom of the third inning after Lamar scored an unearned run in the first inning.

With one out, Rita Santillan singled and stole second before going to third when Kristin Cornell's ground ball to third was misplayed to put runners on first and third. Cornell stole second, bringing up Kinser who lined a change-up over the left-field fence for McDonald County's only runs of the game.

Hopkins made the three runs stand up, retiring 12 of the last 13 batters she faced while striking out nine in seven innings.

Lamar's Ashland Diggs held the Lady Mustangs to just four hits. Kaylee Eberley's and Emily Emmert's singles were the only other hits Diggs allowed besides Kinser's and Santillan's hits in the Lady Mustang three-run third inning.

McDonald County improves 15-1 for the season, including a 7-0 mark in the Big 8 Conference, heading into a conference showdown on Oct. 3 at Logan-Rogersville.

McDonald County scored seven runs in the second inning on the way to a 9-3 win over Nevada in a Big 8 Conference game on Sept. 26 at Nevada High School.

Madeline McCall went the distance for the win, allowing three runs on five hits and five walks while striking out nine.

Myrick finished with three hits while Hopkins and Jackie Grider had two each to lead McDonald County. Santillan, McCall, Eberley and Leach added one hit each.

McDonald County scored 18 runs on 18 hits to open the rain-shortened UCM High School Softball Tournament with an 18-5 win on Sept. 27 over Centralia in Warrensburg.

McCall allowed five runs on eight hits while striking out nine in the five-inning complete game.

Kinser led the Lady Mustangs at the plate with four hits and five RBIs, including a three-run homer. Myrick and Hopkins added three, while Santillan had two hits and Cornell, McCall, Eberley, Grider and Hall had one each.

The Lady Mustangs added a 14-0 win over Clinton on Sept. 27 before all games scheduled for Sept. 28 were canceled due to rain.

The Lady Mustangs scored six runs in the first inning, two in the second and five in the third to build an early 13-0 lead.

Santillan and Hopkins had three hits each to key the offense. Kinser, Grider and McCall added two hits each. Maggie Pratt and Analisa Ramirez both had a hit in their only at-bats after coming off the bench.