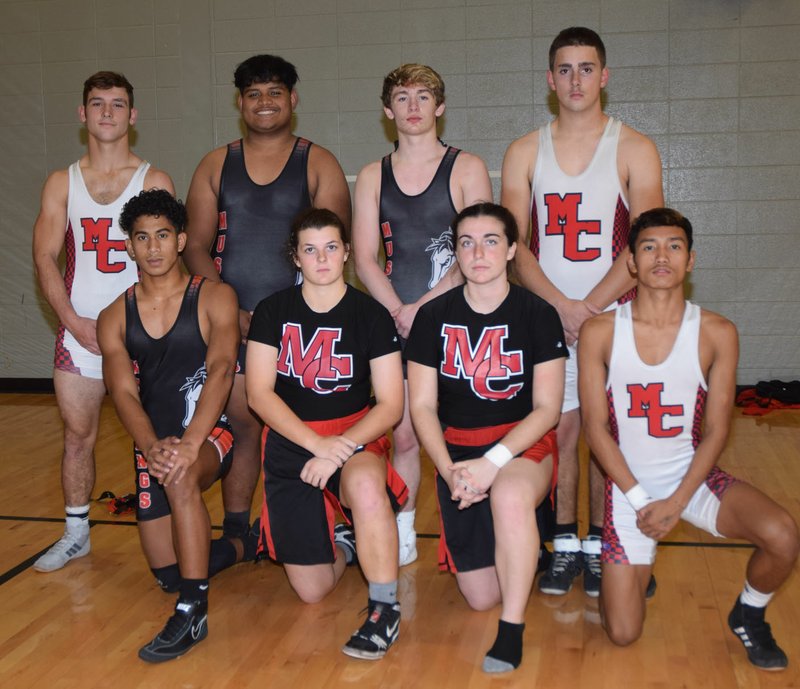 The McDonald County High School wrestling team only had two wrestlers qualify for the state tournament last year, but with both back for the 2019-2020 season the Mustangs' expectations are to improve on that.

"It's definitely reassuring having Oscar and Jack back this year," coach Josh Factor said. "Oscar was our first state champion two years ago and that's what is he shooting for this season. He is a very explosive wrestler. I feel pretty confident with him on his feet and in the top position. He just needs to get a little better from the bottom position. Jack gets caught up in a strength contest at times rather than trying the technical battle and it has cost him a couple of times. That's one of the things we are working on this year -- not getting tunnel vision working for the bear hug."

Also back is heavyweight McCoy Ikosia, who lettered last year. He is joined by freshmen newcomers Blaine Ortiz (106), Levi Smith (120), Cross Spencer (126) and Colter Vick (138), all with youth and junior high experience.

McDonald County will be strong at the lower weights but will need help at the higher weights to be competitive as a team.

"We are hoping we can fill all 14 weight classes this year," Factor said. "We want to have a full team to compete in our duals. It has been a struggle for us filling all the weights. I think we will be pretty strong up through 152 pounds. After that we have a lot of unanswered questions. Overall, I think there is a realistic chance we can be like the 2017-2018 team and get as many as five wrestlers to state."

Factor sand there a "handful" of wrestlers in the mix that are capable of making it to state.

"Eh Doh made it to the bubble match (winner to state, loser stays home) at districts last year," Factor said. "Junior Teriek wasn't far from it. They both are hard workers and kids who compete in three sports. Those are hard to find these days."

Factor said several of the freshman newcomers have a chance to get to state as well as some of his veteran returners.

In addition to the boys team, McDonald County has six girls out for wrestling, not enough for a team, but who will compete on an individual basis.

McDonald County opens its 2019-2020 season on Dec. 3 in a triangular against Rogers High School and Rogers Heritage High School in Rogers, Ark. The Mustangs' first home match of the season is a triangular on Dec. 5 against Seneca and Diamond.

Print Headline: Wrestlers Hope To Be In State Conversation