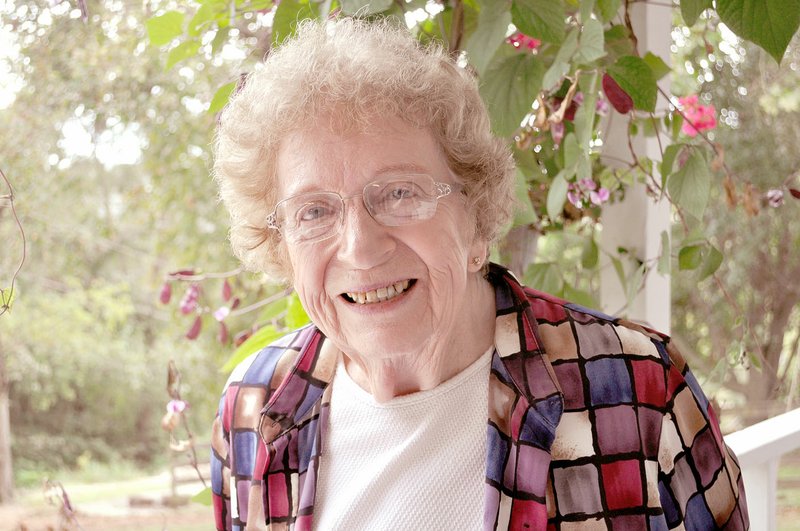 RACHEL DICKERSON/MCDONALD COUNTY PRESS Maureen Leonard of Pineville is pictured at her home on Oct. 15, 2019. She has held many volunteer positions since moving to Pineville 23 years ago.

Maureen Leonard of Pineville has done a lot of volunteer work in the 23 years she has lived in McDonald County.

She was born in Olds, Alberta, Canada, to a mother who had come from Iowa in 1929 and a father who was born in Yorkshire, England, and served in World War I. She was 12 when she moved to Iowa in 1944 after her father died.

She graduated from high school in Iowa, worked a couple of jobs and got married in May 1951 to her husband, Lem. They moved to southern Iowa. He was in construction, and they moved a lot.

She lived in Illinois for 16 years. She started college at the age of 35 at a community college in Illinois.

"It wasn't common for an older person to be in college in the late '60s," she said.

She took an economics course, which turned out to be a very good choice, she said. It served her well later when she took a test for state employment in Iowa. The family moved back to Iowa in 1973, and her husband opened a law practice. She finished her associate's degree there and commuted to Northwest Missouri State University. She graduated in 1976 with a degree in elementary education.

She substitute taught for two years and then had the chance to open a job service office in Corning, Iowa, in 1979. After five years, she interviewed for a job doing labor surveys for the state of Iowa.

"We obtained a statistical profile of the available workforce county by county," she said.

She traveled Iowa for 11 years before retirement. She retired in 1995. She moved to Pineville in 1996.

Her first volunteer job was half a day a week at the economic security office in Anderson, which helped with food, fuel, weatherization, etc., she said.

Then she tutored elementary students in White Rock and Pineville.

Next, she helped with dental screenings for two or three years. Dental assistants would go into schools and screen students, and she would write down any dental problems.

Leonard said she spent literally hundreds of hours researching commissioners' minutes going back to the late 1800s looking for exterior changes or additions to the old courthouse to help someone who was trying to get it declared a historic landmark.

She belonged to Friends of the Library and was the secretary of that organization when it was in existence.

She belonged to Sugar Creek's Betterment Association, which sponsored many events with proceeds going to help children in various ways, she said.

She has been a member of the American Legion Auxiliary since she has lived here. It sponsors a benefit dinner every third Saturday of the month to help pay the bills.

She found support and helped establish the Pineville/Jane Chamber of Commerce in 2004, which today is county-wide.

She established a farmers market in Pineville several years ago.

Leonard became a naturalized citizen of the U.S. in 1951.

In 1978 she visited England for the first time. She has been back to the British Isles 15 or 16 times, and she has sponsored visits to Great Britain for all six of her grandchildren.

She enjoys live music jams and playing cards once a week.

In 2009 the McDonald County Chamber of Commerce presented Leonard with a plaque with a message titled "The Power of One."

It says, "The little things you do each day have the power to affect a good many people. You inspire us with your willingness and ability to help others. You take on the world one day at a time, continuously searching for a way to make things better, seizing the opportunity to improve everyday life. You make a world of difference."