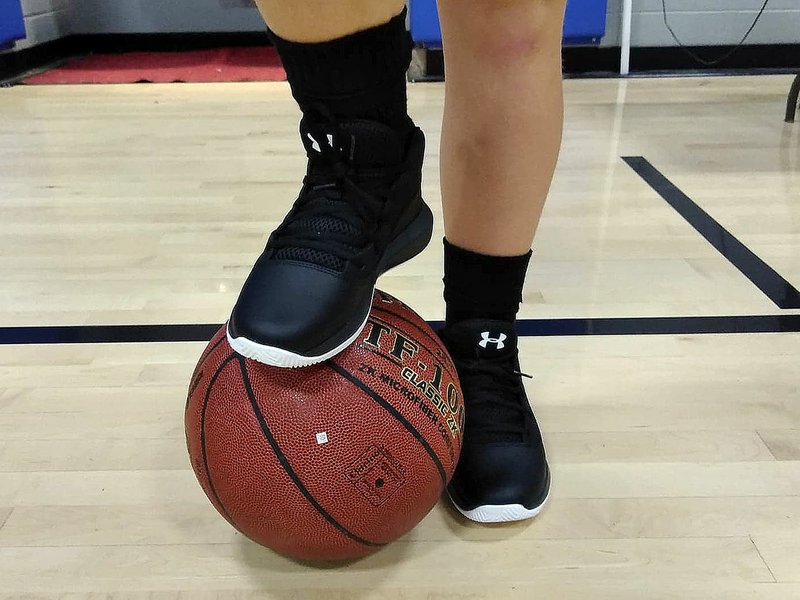 MEGAN DAVIS/MCDONALD COUNTY PRESS The boy's and girl's basketball teams in Southwest City both received brand new Under Armour athletic socks and shoes last week through the community's Kicks 4 Kids program. For the past four years, local businesses have donated to ensure that players have adequate gear for the season.

Southwest City Elementary's basketball players have a bit extra to be thankful for this Thanksgiving, thanks to Kicks 4 Kids and a caring community. The local organization gathers donations from area businesses and generous donors to purchase new, matching athletic shoes and socks for the fifth- and sixth-grade boys and girls teams.

Kicks 4 Kids was born out of necessity in 2016 when Larry Vancuren and J.R. Morgan were spectating at a basketball game and noticed a serious lack of traction on the court. Morgan said kids were sliding around, left and right, as if they were on ice.

Vancuren and Morgan were called to action. The two stepped in, stepped up, and helped raise funds for the teams' new footwear.

Last month, coach Mitchell Lett worked with Garrett Crane, owner of Sports Locker in Grove, Okla., to measure each player's feet for a snug fit. Crane then took those sizes, compared them to available inventory and selected a cohesive shoe and sock style for the players. He said it can be challenging with size needs ranging from child to adult.

Crane works with dozens of local teams to provide athletic wear and equipment, but says Kicks 4 Kids is in a league alone.

"I've never seen a community come together to take care of their players like this," he said. "It's definitely unique."

With only one week of practice behind them, both the boys and girls teams laced up their new shoes on Tuesday, Nov. 12 and hit the court to practice for their first scrimmage of the season.

Words of praise and confidence could be heard across the court.

"These shoes have good ankle support," one player said. "I finally have a pair of shoes that aren't slippery."