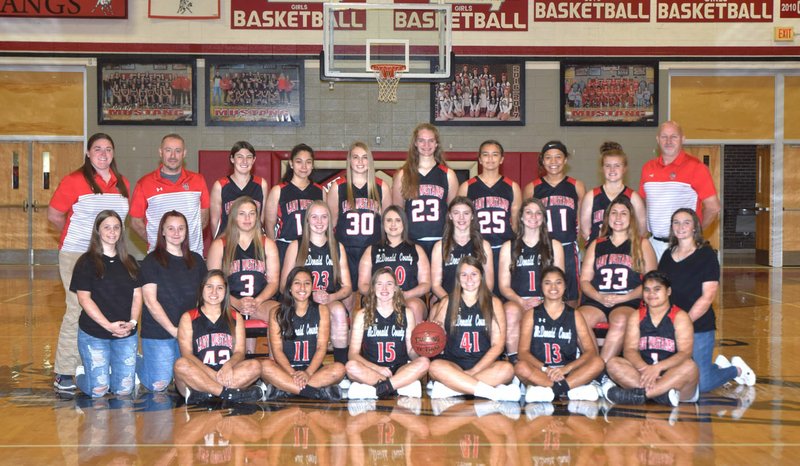 With three returning starters back, the 2019-2020 McDonald County Lady Mustang basketball team looks to improve on its 7-18 record from last year.

Also back is head coach Chris Kennedy, who enters his second year at the helm of the Lady Mustangs.

"We have a year of basketball under the same system, so we should be able to step forward and make some progress," Kennedy said. "So far I have seen that. We are trying to come out every day and get better in practice and hopefully that will carry over into games where we can step up and win some crucial games in conference and districts."

Leading the returning starters is four-year starter Ragan Wilson. Other starters back are Rita Santillan and Kristin Penn.

"Ragan is the best leader we have," Kennedy said. "She is pushing herself and everybody on the team to get better. Rita in an anchor we can rely on. She gets us going when it comes to hustling and getting after it. Penn is a really good outside shooter. She has started to step up and figure the speed of the game out at the varsity level."

In addition to the returning starters, Kennedy has four other returning lettermen in Laney Wilson, Caitlyn Barton, Alexia Estrada and Sydney Killion.

Kennedy said the key for his team to be successful is their ability to score on a consistent basis.

"The main thing for us is our shooting and being able to get the ball in the hole,"Kennedy said. "That comes with being able to execute offenses and getting good shots and shooting the ball fundamentally the right way. That's the key to us being a very successful team."

Kennedy said he hopes his defense can create some scoring opportunities.

"We hustle as good as anybody," Kennedy said. "We get after it as well as anybody. It's one of the things I haven't had to worry about since I have been here. We want to be more aggressive on defense this year and get out in the passing lanes and create some turnovers.."

Another way to possibly help out scoring is playing at a faster tempo this year, Kennedy said.

"We are trying to get the ball up and down the floor a little bit more this year," Kennedy said. "I think we have grown and figured each other out and the kids have figured me out. That is something we did this summer and hopefully that will carry on into the season. We want to use our quickness since we are lacking in size."

With seven returning lettermen plus newcomers in sophomores Kloe Myers and Abigail Wiseman and freshman Samara Smith, Kennedy said he has the versatility to move people around.

"We can put people in two or three different spots and that is going to help us be successful," Kennedy said. "We have good depth and that will allow us to move people around to where they can help us the most."

The Lady Mustangs open the season with back-to-back tournaments. The first is at Carl Junction from Dec. 2-6 followed by the Lady Eagle Classic in Joplin from Dec. 12-14. McDonald County's home opener is set for Dec. 19 against Carthage. Their first game in the West Division of the Big 8 Conference is not until Jan. 17 at Seneca.