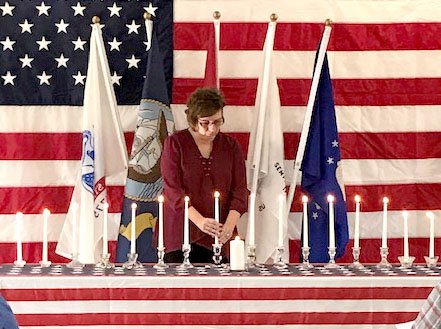 Photo submitted Kim Bell lights a candle during a special Veterans Day ceremony last year. Organizers plan to host another ceremony this year at 2 p.m. on Sunday, Nov. 10, at the Pineville Community Center. The program is free and open to the public.

A common grave in Pineville has sparked some interest for history buffs who are trying to dig into Civil War history.

According to common knowledge, the Battle of Pineville occurred on Aug. 12, 1863, Dobbs said. "The dead were buried in an unmarked common grave 'near the big cedar tree' in the Pineville cemetery," she said.

The interest has sparked organizers to honor those from McDonald County who died during the Civil War, Dobbs said.

A special Veterans Day ceremony is planned for 2 p.m. Sunday, Nov. 10, at the Pineville Community Center.

"There is a Pineville grave that is a common grave, and we have been researching to find any names," Dobbs said. "That has become a driving force for this year, to honor Civil War veterans.

"We invite all veterans and their families to attend as we join Americans across the country in remembrance of those who have served throughout our history," Dobbs said.

"We will have a special candle-lighting ceremony in remembrance of the soldiers from the county who sacrificed their lives during the Civil War."

A video of an American Legion graveside ceremony also will be shown.

"The county has always had a highly patriotic attitude as a whole. We've had a high percentage of McDonald County residents who have enlisted and served in every war."

Many families were pitted against each other in Missouri as the ending battles of the Civil War occurred.

"It was brother against brother," Dobbs said.

The program is free and open to the public.