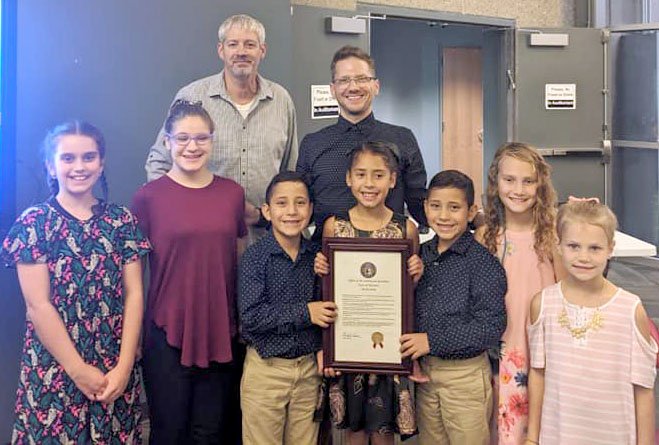 Courtesy photo/McDonald County Press McDonald County School Board president Scott Goldstein and other board members recently honored MC Fashion Week, a program that highlights students with developmental disabilities as well as students without disabilities. Students had the opportunity to participate in a special event at Tan-Tar-A. The lieutenant governor issued a declaration, honoring the program for championing and including all children while giving them a chance to shine and be cheered by their peers. Some of the participating students are pictured here with teacher Peter Alumbaugh.

A chance to shine on the runway while highlighting inclusion and diversity is expanding to include all McDonald County schools this coming April.

"It started as a way to give our kids an opportunity to shine," he said. "It took off from there."

Alumbaugh got the idea when he attended a fashion show in Bentonville. The inclusive fashion show featured people with visible disabilities. The show sparked a thought that students who normally don't have numerous chances to shine could be applauded in a positive forum.

The district-wide initiative, called MC Fashion Show, features models who are students with disabilities and students without disabilities, Alumbaugh said. The positive environment and opportunity to highlight students gained traction after its first year at Anderson. This will be the third year the program has grown to also encompass high school students. This past April, the show expanded to include eight schools, 72 models and 2,000 attendees, including 300 family members.

This coming April, all McDonald County schools will be involved, he said.

"We champion the message of inclusion and diversity," he said. "The whole mission, once it started catching on, is to hold a show each April to promote autism awareness and acceptance."

On Sept. 28, several students had the opportunity to participate in a runway show before the Missouri School Board Association conference held at Tan-Tar-A. School board president Scott Goldstein and other board members recognized Alumbaugh and the program's efforts to make a difference in the lives of McDonald County students.

"The runway is the place for an inclusive celebration," Alumbaugh said. "We really believe that all kids deserve a positive representation of themselves (in the show.)"

Gaining momentum and expanding to include more students is a growing trend for the program. Alumbaugh said other school districts have contacted them, asking more about the program and expressing interest in launching a similar program.

Children who aren't involved in band or sports don't have as many opportunities to receive accolades. This program provides those chances, he said.

One mother approached Alumbaugh after a show. Her daughter, who had a profound disability, was able to have positive interaction and reinforcement from others.

"She was crying. She didn't think she would ever see her daughter have that kind of experience, with people cheering and applauding for her."