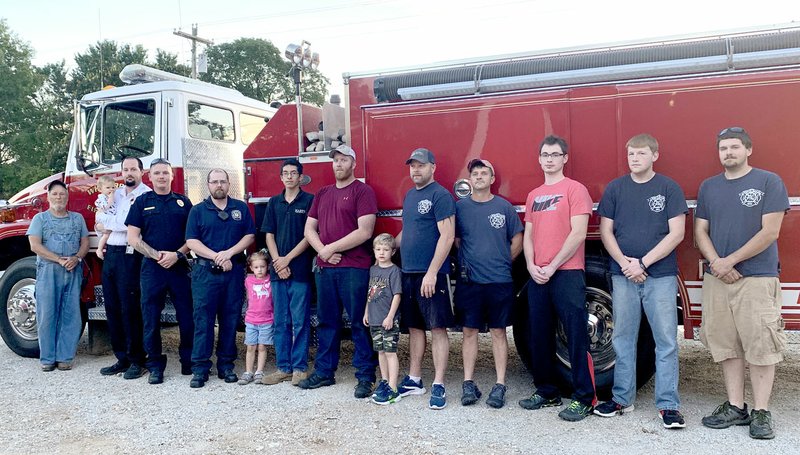 Sally Carroll/McDonald County Press Fred Parker (second from the left, in the white shirt, holding the baby) has been named the new White Rock Fire Chief. Parker previously has served as assistant fire chief. Parker's long-term goals include renovating Station No. 1 in Jane, as well as building another station near the Jane campus of Crowder College.

Former Fire Chief Joe Lahr is still volunteering with the department and running calls, but decided to take a break from the administrative duties, Parker said.

With the promotion, Parker said now is heading up two major long-term goals he hopes the department will achieve.

Remodeling and repainting Station No. 1, located in Jane on Rains Road, is one of his top priorities.

The station is home to dinners and fundraisers and it's important that the department promotes a nice-looking backdrop for those events, he said. Firefighters, along with the Women's Auxiliary, host chili suppers and spaghetti dinners there to raise additional funds for the department.

The station has needed a renovation for quite some time, Parker said. A renovation could take a year or two to complete, he added.

Fire officials have also started plans to build a station down by Crowder College, near the commercial center in Jane.

"We're taking a look at the needs of that area and the equipment needed. We have a small budget to focus on our fleet. We're looking at what kind of station we need down there," he said.

The White Rock Fire Department, an all-volunteer department, covers an area of 90 square miles. With two stations -- one in Jane and one off of Highway 90 -- firefighters can respond to a number of incidents.

In April, voters approved a fire protection district, which establishes a base for tax revenue. The approval enables officials to levy a tax mil increase of 30 cents per $100 assessed property value, White Rock Fire Department board chairman Dan Moore said earlier this year.