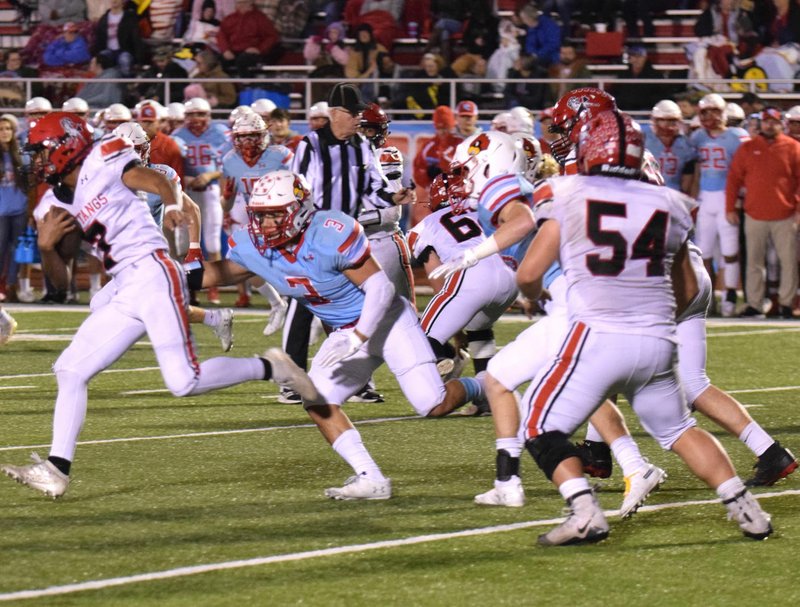 The first score reported from the McDonald County versus Webb City game in Missouri Class 4, District 6, football game surely had the Twitter world in shock.

McDonald County's Levi Helm recovered a Webb City fumble on the Cardinals' first possession of the game that led to a 14-yard touchdown pass from Cole Martin to Trent Alik. Jared Mora's PAT gave the Mustangs a 7-0 lead with 7:34 left in the first quarter.

But Webb City quickly righted the ship, scoring touchdowns on four of its remaining six first-half possessions to take a 28-7 lead at intermission on the way to a 49-14 win on Nov. 1 at Webb City High School.

Weathers scored on an eight-yard run that capped a 56-yard drive, that along with the first of seven extra points by Cameron Clark, tied the game at 7-7 with 6:23 left in the first quarter.

Kabala then put Webb City up 14-7 on an eight-yard run with 1:47 left in the opening period.

Goddard and Kabala connected a second time -- this time for a 26-yard touchdown for a 28-7 lead at halftime.

The Cardinals had a chance for a last-second field goal, but Mora blocked Clark's 37-yard attempt as the horn sounded.

Kabala opened the second half with a 63-yard touchdown run on the first play from scrimmage before Goddard hit Gary Clinton with a 10-yard touchdown pass to give Webb City a 42-7 lead with 7:03 left in the third quarter.

Jack Teague stopped the Cardinals' next drive, recovering the third Webb City fumble of the game at the home team's 30-yard line.

Martin ran for 13 yards and hit Dylan Allison for six before Junior Teriek carried for two yards to the nine. Martin then faked to Teriek before going straight up the middle for a nine-yard touchdown to cut the lead to 42-14 with 10 seconds left in the third quarter.

Kabala wasted no time stretching the lead back to 35 points, returning the ensuing kickoff 67 yards for a 49-14 lead.

McDonald County then marched from its own 29 to the Webb City 20 before turning the ball over on downs and allowing Webb City to run out the clock.

Martin hit Allison for 16 yards, and Alik for seven, while Teague ran for 13 yards on two carries and Teriek had 14 yards on four carries to key the drive.

"We came out and did some good things offensively on our first drive before we stalled out," Hoover said. "But we moved the ball a little and that allowed us to punt and pin them back in their own territory.

"Our defense got us a fumble and the offense went in for the score. We played a couple of good series on both sides of the ball. I was proud of our kids when Webb City went ahead. We kept trying to score and trying to stop them. Our kids never laid down and they played with a lot of pride and fought to the end.

"From an offensive perspective, we scored the third-most points Webb City has allowed all year. We put up 14 points and honestly had a chance for another score or two. Defensively, their offense is fast and physical. We knew it was going to be a tall order and we would have to play our absolute best game. They were able to do some things against us. Kabala and Weathers are two guys you just don't see week-to-week in our conference."

McDonald County gained 216 total yards, including 99 on the ground. Teriek finished 80 yards on 19 carries to lead the ground game. Martin completed 11 of 24 passes for 117 yards. Alik caught five passes for 63 yards, while Allison had four catches for 36 yards.

McDonald County finishes the season 2-8 overall, including a 2-4 record in the West Division of the Big 8 Conference.