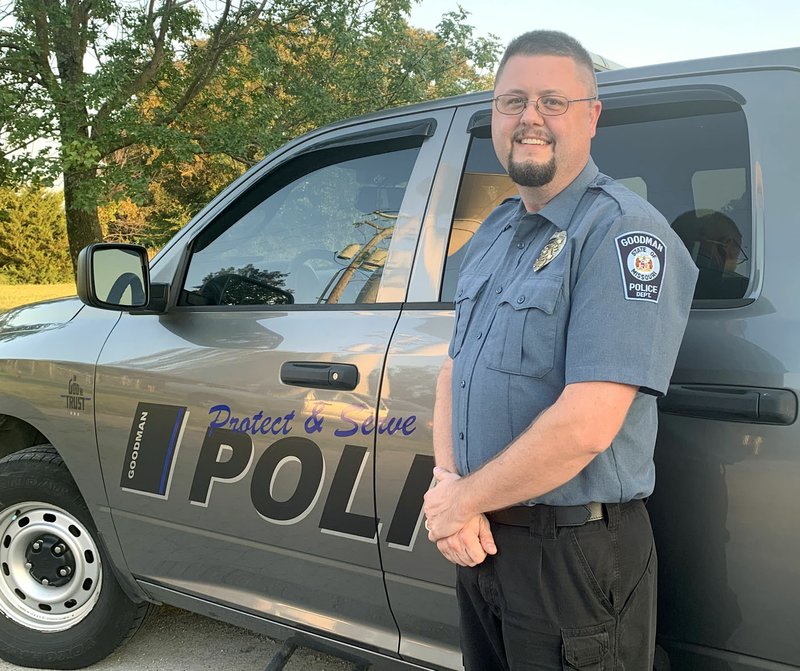 Sally Carroll/McDonald County Press Curt Drake has started a new chapter after serving the city of Goodman as police chief for 13 years. Drake resigned his post and is now working for the Neosho Police Department.

Curt Drake is calling it a new beginning. The Goodman Police Chief resigned his 13-year post and joined the Neosho Police Department.

Drake gave notice to Goodman city officials on Oct. 24 that Oct. 31 would be his last day to serve Goodman. He began his new job on Monday, Nov 4.

"I'm really excited to start a new chapter," he said. "I really feel that's where God is leading me."

Goodman Mayor Greg Richmond said he appreciates Drake's years of service with the city of Goodman.

"I wish him the best as he continues his career in law enforcement."

In his 13 years of service to Goodman, the police chief came to know and love the people he served, Drake said.

The last three years have been particularly difficult for Drake. Two people have tried to unseat him and take his job, Drake said.

The Goodman Tire & Auto's burglary in May became one of the first points of contention to spark a conversation that Drake wasn't doing his job. Owner Meghan Sprenkle spoke to the Goodman City Council on June 4, saying that the investigation was not being handled properly. She also launched a formal complaint, writing a letter to the mayor. She asked that the McDonald County Sheriff's Office take over the investigation.

Drake said he was experiencing medical problems during that time frame. He had kidney stones and was taking prescription medicine for pain. Richmond said during the June 4 city council meeting that Drake did not feel he was able to fulfill his duties properly while on that pain medication, so Drake went on medical leave.

Drake underwent surgery and was on medical leave from May 29 through June 20. During that time, the investigation was turned over to the McDonald County Sheriff's Office.

In recent months, Goodman city officials had planned to hold a meeting to discuss his future role for the city. Near the end of July or early August, Drake said officials attempted to post a notice and hold a meeting less than the required 24 hours, as required by law.

Citizens who saw the posted sign became angry and questioned the timing. The meeting did not take place, Drake said.

At the Aug. 19 city council meeting, citizens said they saw a post on social media regarding Drake's job. One citizen asked why the city wanted to get rid of Drake. The city already had a vacant assistant police chief's post, due to a resignation in the summer.

Richmond responded that the meeting did not take place. When asked about a petition posted at Dollar General to rid the town of Drake, city officials said the petition was not posted by the city council, but by an individual.

In city council meetings that followed, citizens asked about increased police presence, when the police vacancy would be filled and the future of Drake's position with the city.

According to minutes of a special closed meeting on Sept. 11, alderman Ed Tuomala moved to present Chief Drake with a letter for consideration of removal of office and a meeting on discipline to be held at 6 p.m. Thursday, Sept. 26. Alderman Beth Hallmark seconded. Hallmark, Tuomala and alderman Calvin Wilson voted their approval. Alderman Ron Johnson was not present.

Drake said he received the letter on Sept. 17 regarding the meeting that was set for Sept. 26. But on Sept. 26, Drake's attorney contacted him, telling him the meeting had been postponed until Nov. 4.

Richmond confirmed the meeting would take place in November. He said the Sept. 26 meeting was postponed due to "unforeseen circumstances."

The last few months have been rocky, Drake said. Several people asked city council members to hire more help. Several people have complained about increased drug activity, speeders and other crime while only having one officer on the payroll.

Drake was the sole police officer for the town for several months, due to the assistant police chief's resignation.

Drake said he received help from the McDonald County Sheriff's Office, but several citizens said they were concerned about increased crime, especially during the nighttime hours.

In weeks to come, city officials said during city council meetings that they were taking applications for the assistant police chief vacancy.

Drake said he asked Gary Huff, a retired MCSO officer, to consider applying for the job opening. City officials hired Huff, from among a field of applicants, who started his new post with Goodman on Sept. 17. Drake said he hopes that city officials will promote him to chief. "I trust him, without a doubt. I would be leaving it in good hands," he said.

Drake has a long history in Goodman. During the tumultuous times, he said he still took pride in caring for Goodman citizens.

As different allegations were made and termination seemed imminent, Drake said he decided not to pursue other legal action. Despite the outcome, he didn't want citizens to foot the bill for legal work that could drag on.

"I basically chose to pursue job opportunities outside the city," he said.

"When I made the decision to leave, I still didn't want to. I said, 'If God opens the door, I'm not going to back down,'" he said.

"It was like a Mac truck lifted off my shoulders."

In his new role, Drake is working as an officer, patrolling Neosho.

It's a job he embraces.

"I actually have had joy again," he said.