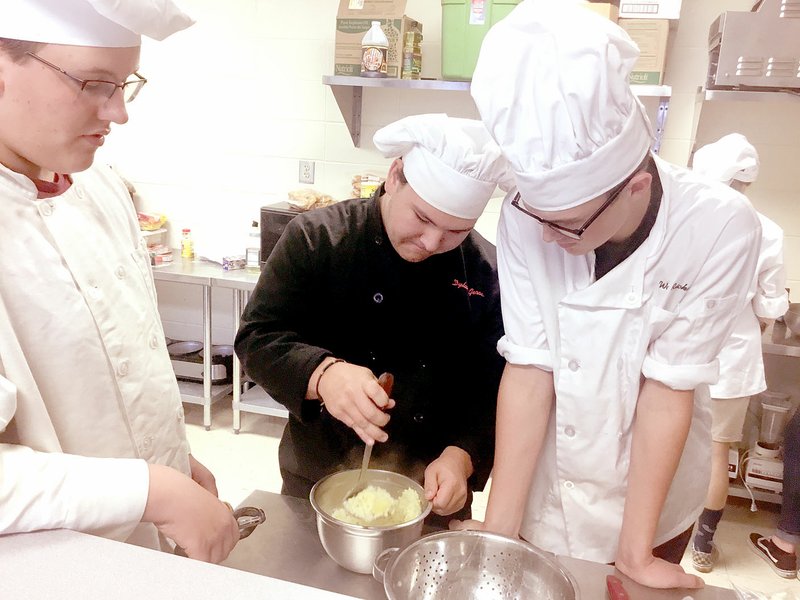 PHOTO SUBMITTED McDonald County High School student Dylan Gerow (center) mashes potatoes for the astro papa (mashed potato and steak quesadillas) as Keenan Meador (left) and Wade Rickman look on. The recipe is part of a contest to cook foods for NASA for space travel and the international space station.

Culinary students at McDonald County High School are working on a project that has them thinking about food in space.

NASA's HUNCH program is a nationwide STEM program in which students solve problems for NASA. Students have worked on all kinds of problems, but one of the fastest-growing programs focuses on what astronauts eat in space and at the international space station. Now McDonald County students are competing with students around the country and working with NASA to create new recipes for space travel and the international space station.

Marie Strader, who teaches cooking classes at the high school, said she got information on the program from Skills USA, looked into it and thought it might be fun for students to work on. They have a nine-month timeline. In October, they had to submit a research paper. They worked with the physics class at the high school, which was studying microgravity and gravity, Strader said. Both classes researched how food reacts in space and how food is developed and packaged for astronauts and the international space station. The physics class wrote the paper, she said.

In November the cooking class has to submit two recipes. They have to be original recipes and they have to be ethnic dishes, Strader said. They also must follow strict nutritional guidelines because, when astronauts are in space, their nutritional needs are different, she said.

There are four groups within the upper-level class that are working on the recipes. Each group developed a recipe, and they must narrow it down to two, Strader said. The recipes include mole posole lasagna, Tex-tamales with chipotle mango barbecue sauce, astro papa (mashed potato and steak quesadillas) and almond peach flan. To narrow it down, they are going to have the physics students come in and do a taste competition. Their judging will be based on originality, how well the food will hold up during flight and in space, and flavor. Once they choose two they will send them to NASA. NASA will critique the recipes and tell them which will work best for microgravity in December. The critiques will give the class a chance to fine-tune the recipes.

At some point, there will be a preliminary competition in this area, and more information is yet to come on that, Strader said.

In January and February, they will submit a final paper and a two-minute video. If they are selected, in April they will attend the Johnson Space Center Final Culinary Challenge.

Besides being fun, Strader said the contest has learning benefits as well. If students have a strong science background and they love to cook, this shows them ways to combine those two careers, she said.

"I like that they are seeing real life applications of science and math in a way they can use it in the real world along with the culinary, which I have a passion for."

She said the students had to do a lot of math to calculate the nutrition information. They also had to do a lot of critical thinking to make their recipes meet the nutritional requirements. For example, in one recipe they had to substitute a lower sodium ingredient because their recipe had too much sodium. In another dish, they had to add something with fiber that would taste good and go with the dish.

Strader said of the students, "They are so excited. Any time we can do competition, it makes it more exciting for kids. It gives it a real stake to it."