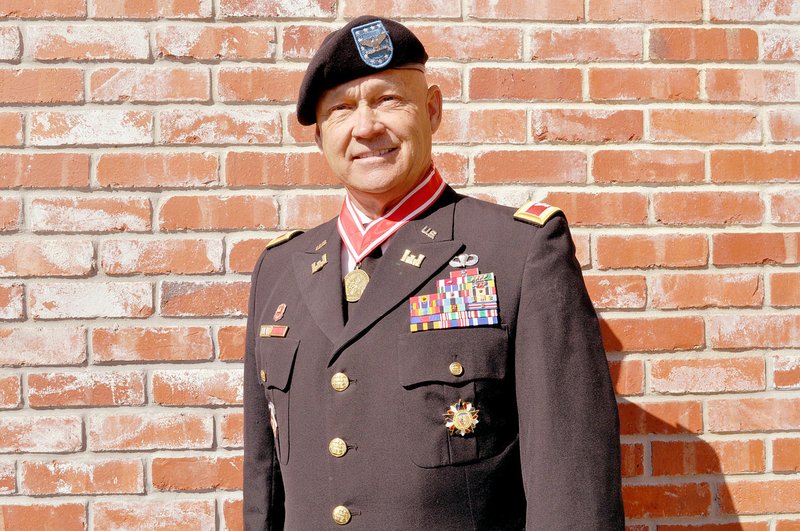 RACHEL DICKERSON/MCDONALD COUNTY PRESS Mark Bartley of Pineville is pictured on Nov. 4, 2019. He is a retired Army colonel with 30 years of service. He also comes from a long line of military service.

Mark Bartley of Pineville comes from a long line of military service, and he himself served 30 years, retiring a full colonel.

His great-great-grandfather, James McKinley Bartley, fought in the Civil War. He joined C Company Third Missouri Cavalry in Rolla. After the Civil War, he and his brother settled in southwest Missouri near Tiff City, and Bartley still owns part of the original land on which they settled.

His grandfather, Hobart McKinley Bartley, was a private in World War I. His father served in the Korean War and two tours in Vietnam.

Bartley enlisted in the Army at age 30 in 1984. He went to basic training at Fort Leonard Wood. Right after basic training, he went to advanced individual training, becoming a heavy construction equipment mechanic. In a year and a half, he reached the rank of sergeant. He went to the federal officer candidate school at Fort Benning, Ga., and there was commissioned second lieutenant.

He went on a 10-year active duty tour, with his first assignment at Fort Knox, Ky., with the 194th Armored Brigade.

His next assignment was at Fort Leonard Wood in 1991 during Desert Storm. Then he was sent to Okinawa, Japan.

"That was a great assignment," he said.

He was with the Army Corps of Engineers overseeing all military construction on the island of Okinawa.

He was released from active duty in 1994 and joined the Missouri National Guard, assigned to the 203rd Combat Heavy Battalion of Joplin. After that, he was assigned to the 35th Engineer Brigade in Fort Leonard Wood as the S2 intelligence officer. He did that a couple of years and then was assigned as the commander of Camp Crowder for three years.

He said this is interesting because, when his parents married, his father was stationed at Camp Crowder and he and his brother were born there. Forty-five years later, he came back to command it. Camp Crowder was deactivated as active duty in the early 1960s and it was reactivated for Desert Storm 2 in 2003, Bartley said.

After that, he was promoted to lieutenant colonel and deployed to Iraq with the 35th Engineer Brigade in the beginning of 2004 and most of 2005.

After his deployment to Iraq, he came back and became the commander of all five national guard training sites in the state of Missouri.

Next, he was a force protection officer for the 35th infantry division, headquartered out of Fort Leavenworth, Kan.

Then he was sent on an active duty overseas assignment with the Corps of Engineers in Afghanistan. He was the western third area officer responsible for all military-related construction from April 2011 to April 2012. While there he became promotable to full colonel.

Upon promotion to colonel, he was the J-1 personnel officer at Ike Skelton Headquarters in Jefferson City. He held that position until retirement. His career spans 30 years, two weeks and one day, retiring Feb. 1, 2014.

Bartley graduated from McDonald County High School. He said, with his father's military career, they moved a lot and he attended 14 different schools, but he attended MCHS his senior year.

He is a member of Joplin VFW and DAV Joplin. He is District 15th Commander for 22 American Legion Posts in southwest Missouri. He is also Region D Regimental Commander for the Missouri State Defense Force (Militia), which is an extension of the Missouri National Guard and authorized by the Missouri Constitution, he said.