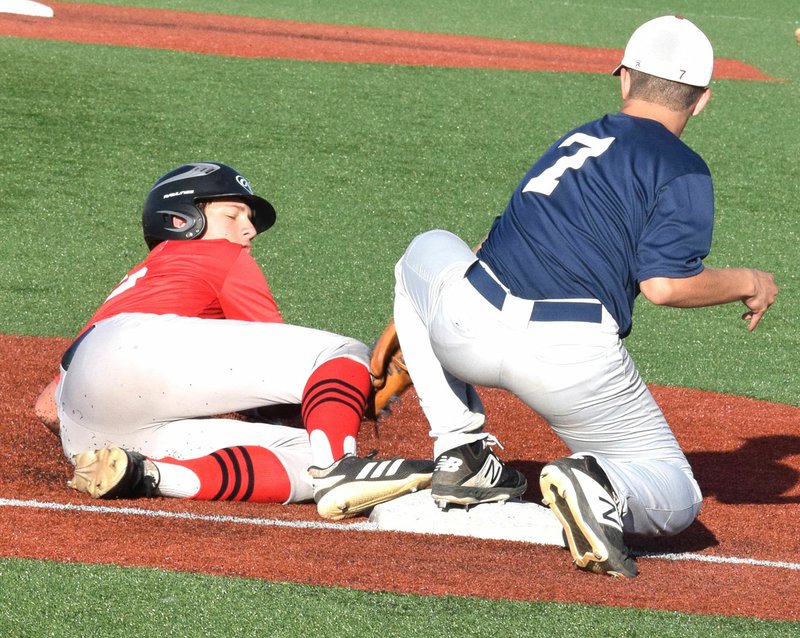 RICK PECK/SPECIAL TO MCDONALD COUNTY PRESS McDonald County's Cross Dowd beats a throw to third base during Joplin's 4-0 win in the opening game of a doubleheader on June 17 at Joplin High School.

Joplin scored four runs in the bottom of the fifth inning to pull out a 5-4 win in the second game of a doubleheader held June 17 at Joplin High School.

McDonald County scored a run in the first on a hit by Cross Dowd, a sacrifice bunt from Jack Parnell and an error on Destyn Dowd's ground ball to third base.

Joplin tied the game in the bottom half of the inning off Dowd on two hits and an error.

McDonald County took a 3-1 lead in the second. Colton Ruddick lead off the inning with a single before Wyatt Yousey and Jacob Gordon walked to load the bases.

Blaine Ortiz drove in the first run when his ground ball to first base was misplayed. Danny Grider followed with a sacrifice fly to center for the inning's second run.

Dowd held Joplin scoreless in the second and third innings before Braxton Spears retired the side in order in the fourth in relief.

McDonald County added a run in the fifth on walks to Grider and Cross Dowd and an RBI single by Parnell.

But in the fifth, after Spears struck the first two batters of the inning, Joplin put together a hit batter, three hits and took advantage of two errors to score four runs for the win.

Parnell had two hits to lead McDonald County at the plate while Cross Dowd and Ruddick had one each.

In the opener, McDonald County was held to a fifth-inning single by Destyn Dowd in Joplin's 4-0 win.

Joplin scored all four of its runs in the first inning off of Weston Gordon. Gordon allowed two hits and walked two in the first before settling down and retiring the final eight batters he faced before Isaac Behm relieved in the fourth.

Behm allowed one hit and walked one in his only inning of work.

McDonald County's next game is at Nevada on June 25.