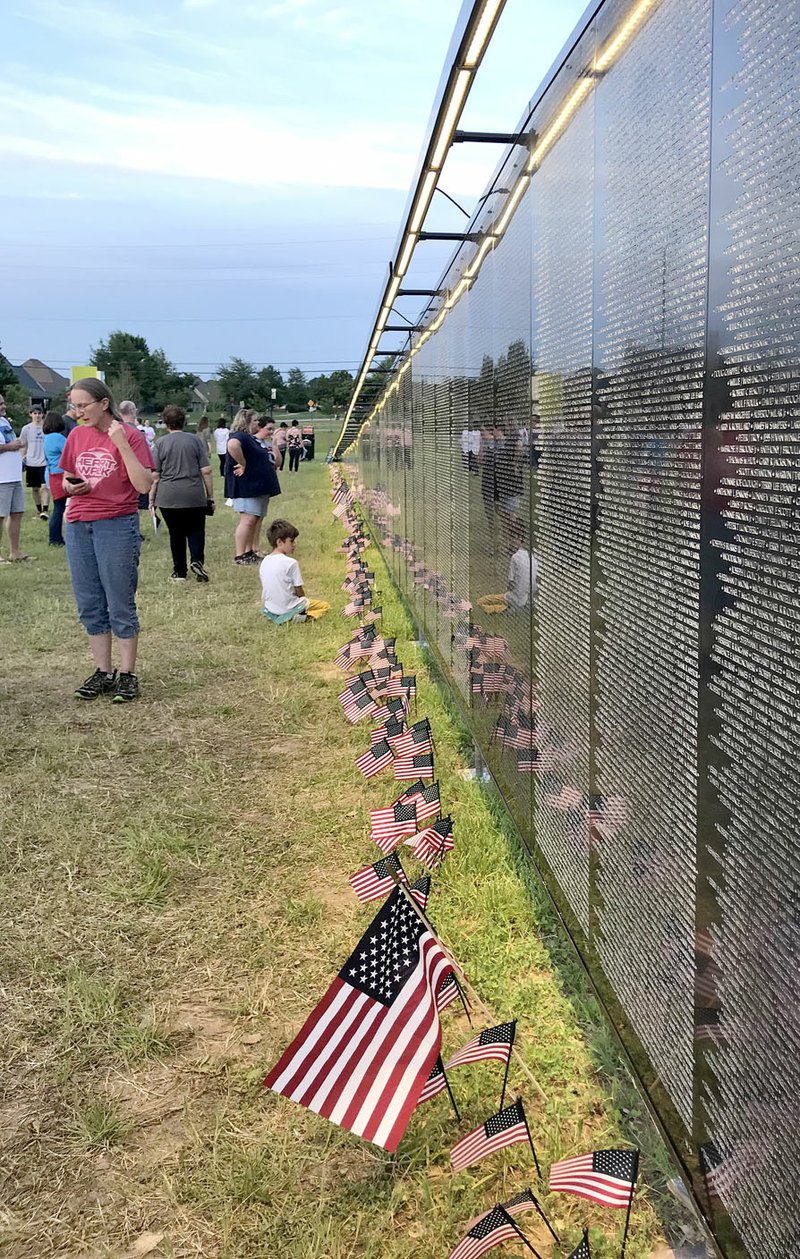 Sally Carroll/McDonald County Press People of all ages view The Wall That Heals, a traveling exhibit that resembles the Vietnam Veterans Memorial in Washington, D.C. Downtown Bentonville hosted the exhibit over Memorial Day weekend. A mobile education center featured a video highlighting area veterans, including those from McDonald County.

On a warm, summer evening, young families and retired folks put small American flags near memorial wreaths. Others looked for names of family and friends among the 58,200 listed on a replica of the Vietnam Veterans Memorial.

As children played and ran nearby, visitors paused and viewed exhibits on display at the mobile education center, just east of the wall.

The Wall That Heals exhibit, operated by the Vietnam Veterans Memorial Fund, was set up near the grounds of Crystal Bridges Art Museum over the Memorial Day weekend. Hosted by Downtown Bentonville, the outdoor exhibit drew visitors to honor, respect and view those who died in the war.

For others who served during that time, The Wall provided an opportunity to find some healing and some hope.

The replica of the Vietnam Veterans Memorial was unveiled on Veterans Day in 1996, according to information on The Wall's website. Since its dedication, The Wall That Heals has been displayed at nearly 600 communities throughout the nation.

Those involved with The Wall's mission believe the traveling exhibit that visits local communities across the country allows family and friends to honor their loved ones in the comfort of familiar surroundings.

The traveling exhibit also offers thousands of veterans struggling to face The Wall to find the strength and courage to do so within their own communities and promoting healing, according to The Wall's website.

The wall is a three-quarter scale replica of the Vietnam Veterans Memorial in Washington, D.C. Like that memorial, the traveling exhibit lists all those who died in the Vietnam War. The replica is constructed of Avonite, a synthetic granite, and features 140 numbered panels supported by an aluminum frame. Those who visit The Wall are able to read the machine-engraved names with the help of modern LED lighting. The Bentonville exhibit was open 24 hours a day.

Those who had family members or friends who died in the war had the opportunity to locate their name and rub the name on a piece of paper with a pencil.

The Wall That Heals listed those who died chronologically, and provided guides to help people find their loved ones.

Ambassadors were on hand for the outside exhibit, asking those who attended if they had questions or needed assistance.

A wreath denoting each branch of the military was on display. Those who had family members who died during the war were encouraged to place a small American flag under the wreath of the branch the soldier served.

The mobile education center featured a video of local veterans who lost their lives in the war, including those from McDonald County.

The education center also featured numerous items on display, including a military helmet, memorials that were similar to those which were left at the wall in Washington, D.C., and a memorial motorcycle. The American Gold Star Mothers donated a Softail Custom Harley in 2012 to pay tribute to the mothers who lost sons to the Vietnam War.

Other items included a package that was returned to a family. The package from home had not reached the soldier before his death.