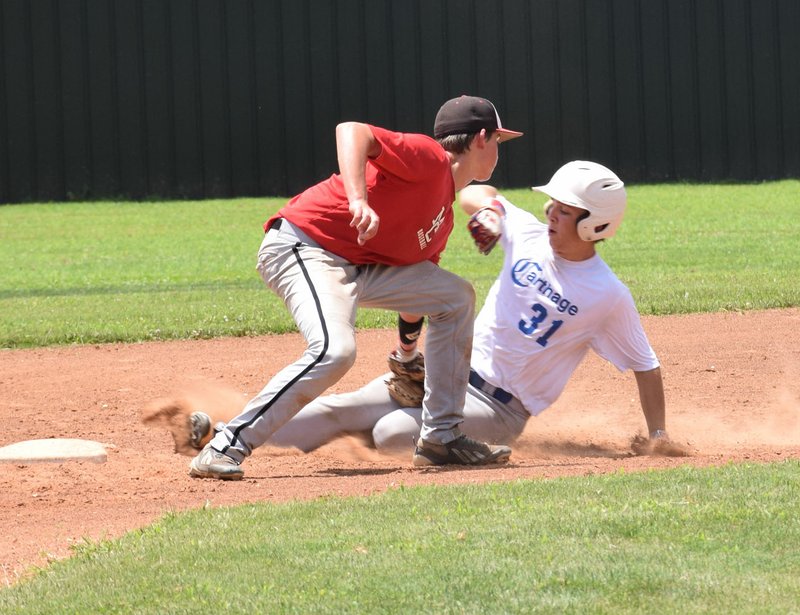 McDonald County scored the only run it would need in the second on a walk, an error and a sacrifice fly by Ethan Francisco.

McDonald County added three insurance runs in the sixth on an error, a single by Sampson Boles and a two-run double by Cole Martin.

Hopkins struck out five, walked three and hit one batter in going the seven-inning distance.

Boles' and Martin's hits in the sixth were the only two hits for McDonald County.

McDonald County's other win was a 4-3 win that came in its tournament opener over Neosho behind the pitching of Rylee Boyd and Francisco.

Boyd allowed three runs on five hits in five innings before Francisco worked the final two innings to get the win.

Tied 3-3 in the bottom of the seventh, McDonald County scored the winning run on a walk to Nevin Price, a bunt hit by Francisco and an error on a hard ground ball by Bo Leach.

Both of McDonald County's losses were lopsided games that ended after five innings due to the 10-run rule.

Tournament champion Arkansas Express scored five runs in the fourth and six in the fifth for a 14-2 win.

Parker Toney took the loss after allowing eight runs in four and a third innings on seven hits. Price worked the final two-thirds of an inning, allowing six runs on five hits and an error.

Boles had a double and Price a single to account for the only two McDonald County hits.

Nevada scored nine runs in the second inning on the way to a 16-4 win to give McDonald County a 2-2 tournament record.

Boles took the loss, allowing three hits and walking two in Nevada's nine-run second before Brandon Armstrong got the final two outs of the inning.

Francisco worked the third and fourth innings. Manuel and Price pitched the fifth.

Martin had two hits to lead McDonald County. Hopkins, Manuel and Leach had one each.

Lamar scored two runs in the bottom of the eighth to break a 4-4 tie in a 6-4 win in a nine-inning game on June 25 in Lamar.

McDonald County was held to four hits over nine innings, one each by Francisco, Manuel, Jordan and Price.

McDonald County won one game and tied one at a doubleheader in Nevada on June 26.

In the opener, McDonald County built an 8-2 lead after three innings and went on to claim a 12-9 decision.

Boyd pitched the first three innings, allowing a pair of unearned runs in the first inning. Boles worked the fourth, Price the fifth and sixth and Helm the seventh.

Hopkins and Price led the offense with three hits each. Martin, Helm, Boles and Boyd all had one hit.

In the nightcap, the game ended in a 4-4 tie. Toney worked a scoreless first and second, as did Martin in the third, before Nevada scored four runs off Jordan in the fourth. Hopkins shut out Nevada in the fifth.

Manuel and Leach had the only two hits for McDonald County.

McDonald County closes out its summer season at the Fort Scott 18U Baseball Tournament on July 5-7 in Fort Scott, Kan.

Print Headline: Mustang Baseball Comes Out With A 2-2 Win In Tourney Play