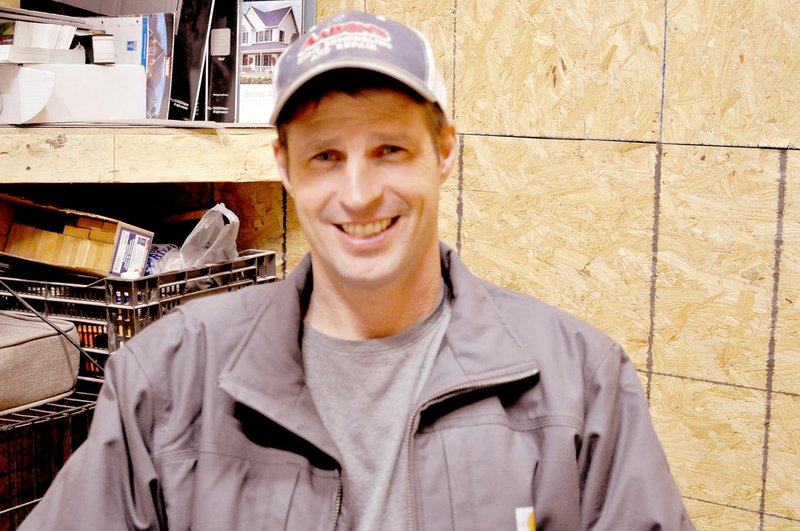 RACHEL DICKERSON/MCDONALD COUNTY PRESS Aaron Barnard is the owner of Aaron's Home Remodeling and Repair in Pineville. He has been in business for 10 years.

Aaron Barnard of Aaron's Home Remodeling and Repair in Pineville says his company does everything from changing out a toilet to building a new home.

He has been in business for 10 years. Before starting his own business, he was driving a dump truck.

"It's kind of a big step to start your own business," he said, but certain hardships in the trucking business led him to part ways with his old job. He had a little trouble with his first remodeling job and went back to trucking for about a month but, after that, he has had a steady stream of business ever since, he said.

His wife, Gail, and two sons, Seth, 19, and Ian, 16, work with him. Gail runs the office, and Seth now works for his father full-time.

"It's starting to turn into a family business," Barnard said. "The boys have worked in the summers too. This is the first year Seth has worked for me full-time."

During the winter, Barnard will have three to four employees, and during the summer he will have six to seven.

Barnard said he is self-taught.

"We've done a couple of homes for ourselves. I used to do side jobs when I was dump trucking, but I never had the guts to do it full-time," he said.

He noted he is not sure why, because he got laid off almost every winter and he made almost as much during those few months on side jobs as he did all year driving the dump truck.

"We do everything from the ground up," Barnard said. "We do dirt work, septics. We do more and more concrete. We do plumbing. We just do everything."

He subcontracts out some things. His brother does heat and air, so he will use him, he said.

"There's not a lot of people who do what we do, which is everything," he said. "We build new homes, we build shops, we fix toilets, we just do everything. A lot of guys won't mess with (switching a toilet out) if they build homes."

He added that his company usually builds about one home a year, but it builds a lot of shops.

He still does a lot of remodeling, too.

"It's the largest part of our business," he said.

The business has a lot of repeat customers, Barnard said.

"I'd say that's half of our business," he said.

Barnard said he likes being his own boss.

"You never know where the day is going to lead. If someone has a leaking roof, it might get prioritized in front of other jobs. You might not go to the job you think you're going to," he said.

"I like that it's something we're good at and people are happy," he said of his job. "We try to make people happy. That's the bottom line."