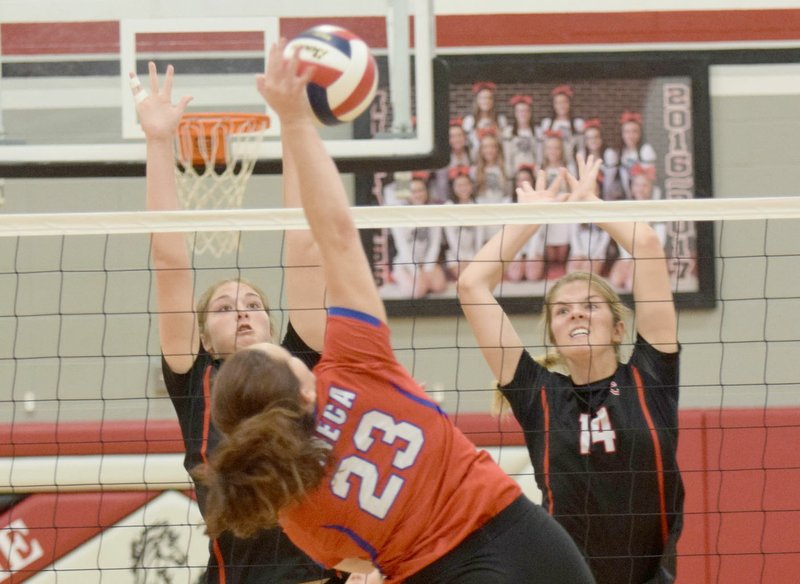 RICK PECK/SPECIAL TO MCDONALD COUNTY PRESS McDonald County's Sydnie Sanny (left) and Adyson Sanny go up to block a spike by Seneca's Haley Nash during the Lady Indians' 15-6, 15-10 in a scrimmage on Aug. 27 at MCHS.

It was full circle for the McDonald County High School volleyball team at a four-team scrimmage held on Aug. 27 at MCHS.

The Lady Mustangs won one match, split one match and lost one match.

McDonald County sustained its lone loss of the night against Seneca in the Lady Mustangs' first match.

McDonald County jumped out to a 3-0 lead in the first game, but the Lady Indians countered with eight straight points before a kill by Ember Killion ended the run.

The teams traded points until Seneca turned an 11-6 advantage into a 15-6 win by scoring the final four points of the game.

The ending of the first game proved to be a harbinger of things to come in the second.

McDonald County jumped out to a 9-6 lead only to have Seneca score three straight points to tie the game.

McDonald County answered by scoring four of the next five points for a 13-10 lead only to see Seneca score the final five points of the game for a 15-13 win.

In their second match of the night, McDonald County claimed a 15-7, 15-9 win over Diamond. Erin Cooper served the first five points for the Lady Mustangs in the opening game. Adyson Sanny and Cooper finished with six service points each in the second game.

In the final match of the night, Monett won the first game 16-14 before McDonald County won the second game by the same score.

"I think tonight went really well," said coach Logan Grab. "I think we had some first game jitters against Seneca, but we got those out of the way and came back against Diamond and did really well. We were really aggressive and capitalized on our hitting. In our third match, we gave up a few points late in the first game, but we were down in the second game and came back which is a good thing because we haven't been able to do that in the past. Overall, I think it was a good start to our season and we are looking forward to playing Tuesday against Carthage."

McDonald County hosts Carthage on Sept. 3 with matches beginning at 5 p.m. The Lady Mustangs host Diamond on Sept. 5 and Joplin on Sept. 10 before going to Webb City on Sept. 12.