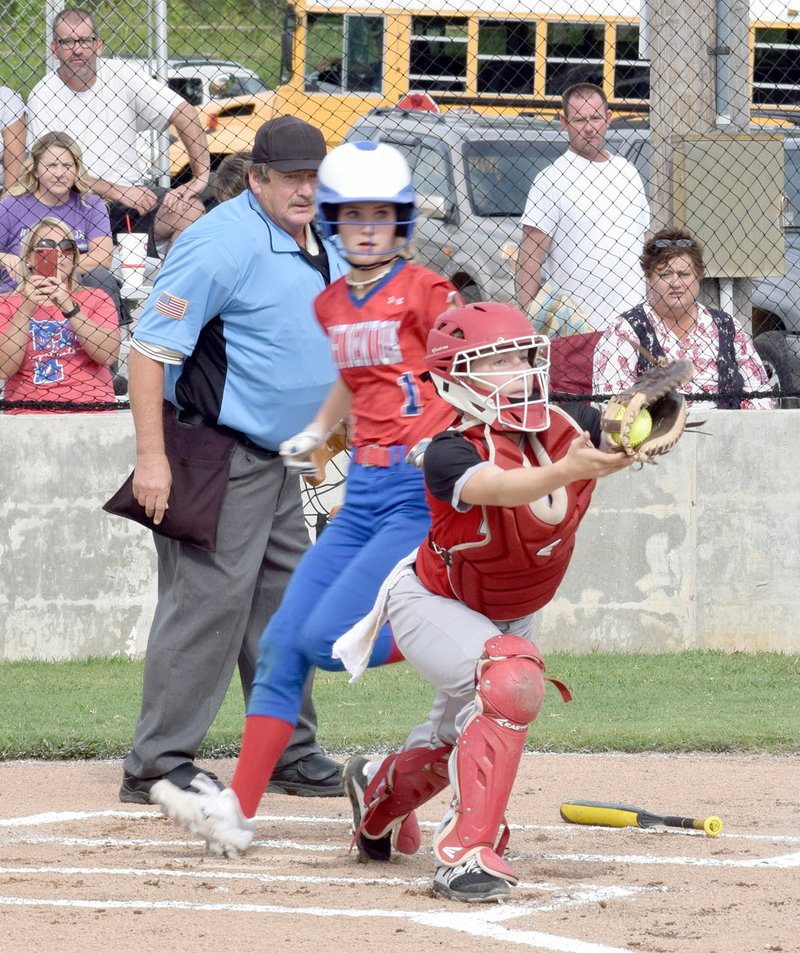 RICK PECK/SPECIAL TO MCDONALD COUNTY PRESS McDonald County freshman catcher Reagan Myrick stretches in vain for a throw to force an East Newton runner at the plate during the Lady Mustangs' 6-4 win on Aug. 27 at MCHS.

Though the two wins for the McDonald County High School softball team at a three-team jamboree held Aug. 27 don't go down as official wins for the 2019 season, anytime they are keeping scores, players want come out on top.

McDonald County opened against East Newton with a 6-4 win. Alexa Hopkins went the distance on the mound for the win, allowing four runs on five hits while striking out two.

East Newton took advantage of two bunt hits to lead off the scrimmage to score a run in the first.

McDonald County used its speed to score four runs in the bottom half of the inning. Rita Santillan led off with a walk and stole second. Kristin Cornell beat out a slow roller to put runners on first and third. Cornell and Santillan then used the first of its two double steals in the inning to score McDonald County's first run.

Whitney Kinser followed with a sharp single up the middle to put runners on first and third before Cornell stole home as Kinser stole second. Freshman Reagan Myrick hit a slow roller for a single and when it was thrown away Kinser scored and Myrick went to third. Hopkins ground ball to second drove in the final run of the inning.

East Newton tied the game in top of third scoring three runs on three hits and an error.

McDonald County scored the winning runs in the bottom of the third. Two errors put runners at first and second with two out before sophomore Adasyn Leach tripled down the right-field line to drive in both runners.

Madeline McCall shut out Nevada on two hits to lead the Lady Mustangs to a 3-0 win in the second game.

The sophomore struck out eight and walked two in four innings.

McDonald County scored all the runs it would need when Santillan led off the bottom of the first with a home run. Cornell followed with a hit before Kinser doubled to put runners on second and third. Cornell then scored the second run of the inning for the Lady Mustangs on a wild pitch.

McDonald County's final run came in the fourth when Melanie Gilming singled home Jackie Grider after Grider had reached on an error.

"We saw some good things on the field tonight," said coach Skyler Rawlins. "It was nice to play against someone other than ourselves. We found out some things we need to work on and some things we are good at. It was something we can build on. I thought we swung it well and our two pitchers did a good job in the circle. Defensively, we have to find outs on bunts, but I think we only made one error."

McDonald County opens its season on Aug. 30 at Carthage before hosting East Newton on Sept. 3 at 4:30 p.m. in its home opener.