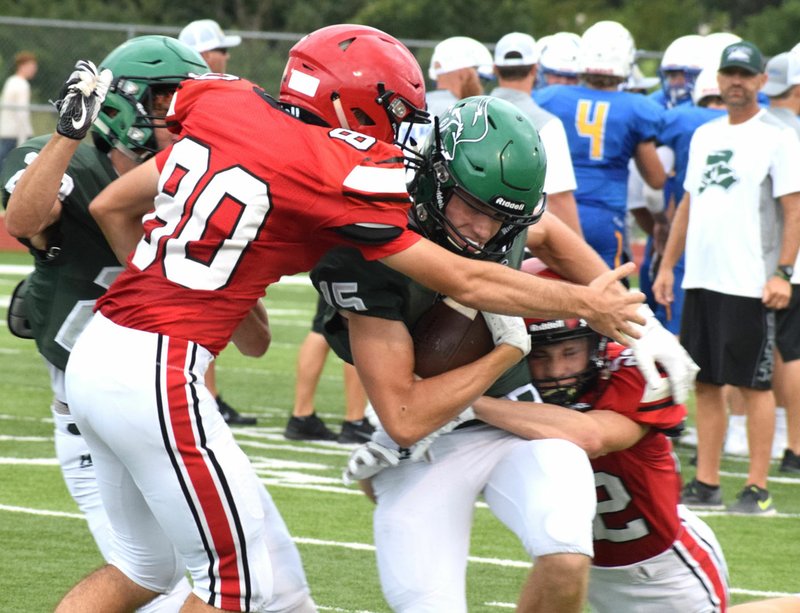 Early in almost all football seasons, the defense is usually ahead of the offense.

Starting the season with only two returning starters on offense, neither of those at a "skill" position, would only tend to exaggerate that gap.

So it should come as no surprise, it was the offense of the McDonald County High School football team that struggled the most at a four-team jamboree held Aug. 23 at Mount Vernon High School.

"Offensively we progressively got better as the night went on and probably finished the night with our best series," coach Kellen Hoover said. "We are still evaluating a lot of guys, so a lot of kids got time. You expect defenses to be a little bit better right now as far as timing and responsibilities. We played three different defenses in one night and yes, you have rules offensively, but we haven't set down and talked about a specific defense like we will from week to week."

The Mustangs opened against Mount Vernon and promptly allowed a 31-yard touchdown on the second play on a missed assignment on a misdirection run.

The Mountaineers took advantage of a pass interference call against McDonald County to score a second touchdown on their ninth play on a 35-yard run.

Cole Martin was at quarterback for the Mustangs' first eight plays. The sophomore completed two of four passes for 22 yards, including a 14-yard completion to fellow sophomore Levi Malone.

Sophomore Colton Ruddick caught an eight-yard pass from Martin on the team's eighth offensive play before moving to quarterback for the final four plays. Ruddick hit Corbin Jones for nine yards before his pass to end zone for an apparent touchdown was dropped.

McDonald County faced off with border rival Neosho in the second scrimmage.

Martin again went the first eight plays but handed off on all eight plays. Jack Teague carried three times for nine yards, while Junior Teriek ran twice for 10 yards and Jones once for five yards.

Ruddick lost 11 yards on bad snaps on two of his four plays but connected with Kyle Hook for four yards on his only pass attempt.

Neosho scored its only touchdown on a seven-yard run on its 11th offensive play. The Mustang defense held the Wildcats to two first downs, while Trent Alik had an interception for the defense's first turnover.

Facing Bolivar in its final scrimmage, the defense held the Liberators out of the end zone, allowing only 37 yards in 12 plays. Omar Manuel had a pick for McDonald County's second turnover of the night.

Martin was two out of four passes in his eight plays, a five-yarder to Michael Williams and a three-yarder to Jones.

Martin also carried three times for 17 yards. Ruddick completed one of three passes, including a meaningless interception on a Hail Mary on the Mustangs' final play of the night.

"Tonight was basically another practice and you could tell," Hoover said. "It was a different speed than a lot of our kids faced. We have quite a bit of inexperience, especially on the offensive side of the ball. I just am really happy with how our defense played. After Mount Vernon, we started flying around the field and made a couple of plays in the backfield and had a couple of takeaways. I thought Levi Helm played really well, as did our defensive ends (Junior Eliam and Garrett Gricks). Jack (Teague) was fast and physical off the edge and Michael Williams did a good job coming downhill and making tackles."

McDonald County opens the 2019 season at home against Marshfield on Friday, Aug. 30. Kickoff is set for 7 p.m.