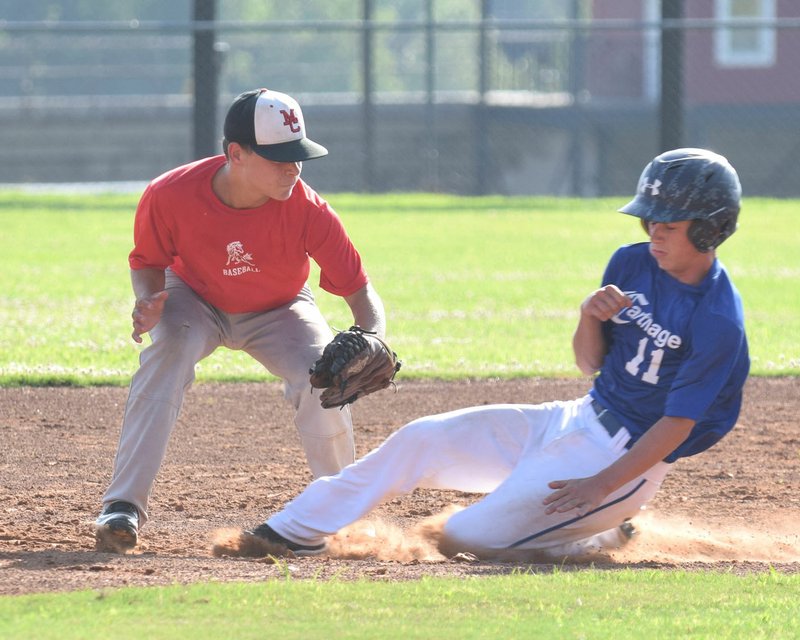 Lee Sohse allowed three runs on three hits in six innings in the first game to lead McDonald County to a 9-4 win. Sohse, a freshman to be at MCHS, struck out seven and walked five.

Wyatt Jordan allowed one run in the seventh on a walk and a hit.

McDonald County took a 2-0 lead in the bottom of the first. Cole Martin and Colton Ruddick walked to lead off the inning. With two outs, Bo Leach singled in both runners.

Carthage cut the lead to 2-1 with a run in the third on two walks and an error.

McDonald County made it 3-1 in the fourth. Sohse walked and Leach singled to put runners on first and third. Sampson Boles drove in Sohse with a groundout to short.

Carthage tied the game with a pair of runs in the top of the sixth on a walk and two hits.

But McDonald County answered in the bottom half of the inning with six runs. Martin doubled to start the uprising. Sohse reached on an error before Junior Eliam and Leach both had RBI singles. Boles walked in front of a two-run single by Jordan. Ethan Francisco drove in the final two runs of the inning with a single.

McDonald County claimed a 9-8 win in the second game, scoring five runs in the top of the fourth to erase an 8-4 deficit.

Ethan Francisco overcame a slow start to get the win. Francisco allowed nine runs, seven in the first two innings, while striking out eight and walking two in five innings.

Carthage took a 4-0 lead in the top of the first. McDonald County cut the lead to 4-1 in the bottom half of the inning. Martin walked, stole second and went to third on an error before scoring on a groundout by Sohse.

Carthage stretched its lead to 7-1 in the top of the second.

McDonald County cut the margin to 7-4 in the third. Parsons singled and scored on a double by Martin. Jordan singled before Sohse and Boles had RBI hits.

Carthage scratched out a run in the top of the fourth to make the score 8-4, but McDonald County took the lead with five runs in the bottom half of the inning.

Francisco, Ethan Lett and Wade Rickman drew back-to-back-to-back walks to load the bases with one out. Parsons walked for the fourth free pass in a row to drive in a run. Martin's ground ball was misplayed to score another. Jordan flew out to left with a run scoring before Sohse's fly ball to center was dropped allowing the tying and winning runs to score.

Martin and Boles had doubles, while Colton Ruddick, Parsons, Jordan and Sohse had singles to lead McDonald County.