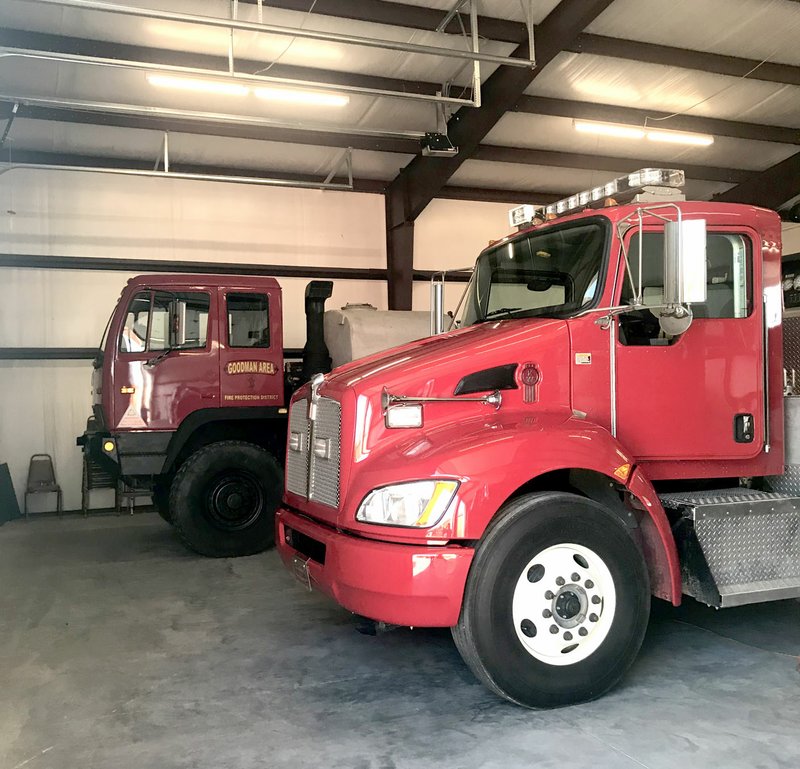 Photo by Sally Carroll/McDonald County Press Officials with the Goodman Area Fire Protection District recently consolidated all their engines and operations into one location. The new fire station, at 108 E. Russell Street, is now home to all the engines as well as office space. Officials moved into the two buildings, which span 8,400 square feet, according to Fire Chief Keith Estes. The April 2017 tornado destroyed two buildings and officials had been housing the engines at Choice Puppies in Goodman.

Goodman fire officials are settling into their new station on East Russell Street, just north of its former location.

The department moved into the two buildings, which span 8,400 square feet, in May, said Goodman Fire Chief Keith Estes. Though some air compressor lines still need to be added, volunteers are finishing up details while being able to work out of the facility, he said.

The two buildings feature enough room for all the fire engines, equipment, plus meeting rooms, office space and restrooms.

The $305,000 price tag included the two buildings, the property and all the utilities, Estes said.

Being able to combine all operations and storage of all fire response vehicles has been a real plus, since the April 2017 tornado damaged the main fire station and the station across the street, he said. For more than a year, fire officials housed some of their equipment at Choice Puppies. Now, all the equipment and fire emergency vehicles are completely moved over, he said.

Funds for the purchase of the property came from insurance money, a settlement from the tornadic destruction. Other money came from the reserve fund, Estes said.

"We were able to do it with no tax increases," he said.

The possibility for the facility at its current location came after private citizens John and Misty Farmer approached the Goodman Area Fire Protection District. They had utilized the back half of the old lumberyard, Estes said, and built a large building next to an existing one, just north of the old main location.

The offer seemed the perfect fit for fire officials. Though the buildings need to be finished off some, the square footage and location are great for volunteer fire crews, Estes said.

The district also operates two other fire stations: one at Splitlog and one on Sorrels Road.

The new main facility, however, will be able to allow volunteer firefighters to respond to any fire incident that happens in town, Estes said.