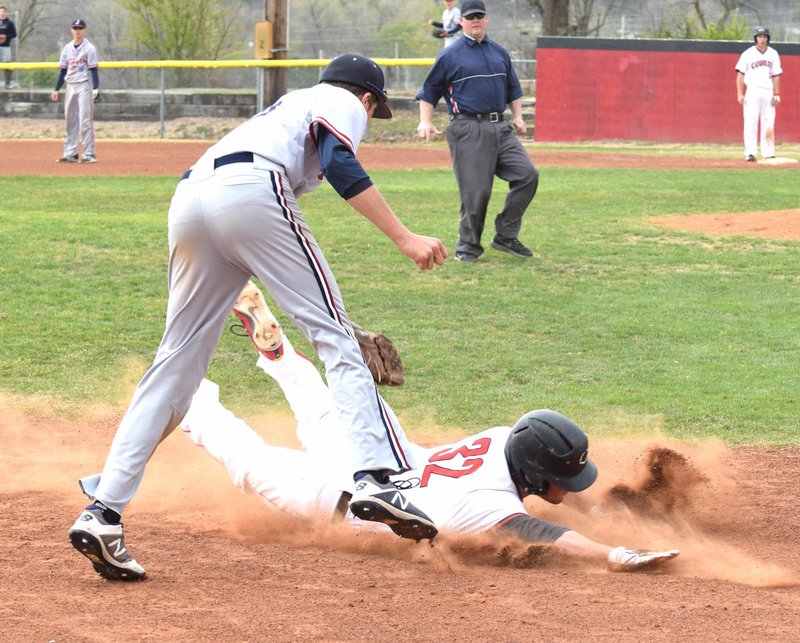 RICK PECK/Special to McDonald County Press McDonald County's Oakley Roessler tries to get under the tag of Joplin third baseman Josh Wells during the Mustangs' 10-7 win on April 21 at MCHS.

The McDonald County High School baseball team rebounded with a win over Joplin on April 21 after a pair of losses earlier in the week snapped the Mustangs' five-game winning streak.

McDonald County got another stellar starting pitching performance, but it was the offense that keyed the Mustangs' 10-7 win. McDonald County pounded out 17 hits in six innings off of three Joplin pitchers, led by three hits each from Ty Shaver and Tyler Stoutsenberger.

McDonald County jumped out in front with a run in the bottom of the first. Shaver was hit by a pitch, stole second and scored on a single by Joe Brown.

Joplin took its only lead in the game with a pair of runs in the top of the second, fueled by a pair of leadoff walks.

But the Mustangs answered in the bottom half of the inning with a run to tie the game. Stoutsenberger singled with one out. Walks to Izak Johnson, Shaver and Boston Dowd forced in Stoutsenberger with the tying run.

McDonald County took a three-run lead in the third. Moore singled to lead off the inning before Trey Black walked and Stoutsenberger drove in a run with his second hit of the day. Johnson singled in the second run of the inning, with the third run scoring on a Joplin error.

McDonald County added a pair of runs in the fourth on hits by Dowd, Black and Stoutsenberger and then broke the game open in the fifth with three runs.

Oakley Roessler doubled to start the fifth-inning uprising before singles by Brown and Moore drove in the runs.

Moore went five innings, allowing just two runs on two hits while striking out six but walking five. Roessler pitched a scoreless sixth, but Joplin scored five runs in the seventh off Jorge Ruiz and Raygan Bradley before Cade Smith got the final out of the game.

In addition to the three hits by Shaver and Stoutsenberger, Dowd, Brown, Moore and Johnson added two hits each, while Black, Jorden Platter and Roessler had one hit each.

McDonald County improved to 12-6 overall while remaining 3-1 in the Big 8 Conference heading into its April 24 game at Monett. The Mustangs return home on April 26 to face Mount Vernon.

The undefeated and top-ranked Class 4 baseball team in the state, the Aurora Houn Dogs, scored three runs in the sixth inning to break-up a classic pitching duel in a 3-1 win over McDonald County on April 19 at MCHS.

Dowd and Aurora's Wyatt Sparks battled on even terms until Aurora got four of its six hits in a three-run sixth inning.

McDonald County scored a lone run in the seventh on a single by Brown, a fielder's choice and a passed ball.

Dowd finished by allowing three runs on six hits while striking out five and walking two. Sparks, a Missouri State signee, allowed three hits and struck out 15 without walking a batter.

Brown had two of the Mustangs' hits. Roessler had the third.

Moore, Grant Cooper and Bradley combined to shutout Lamar on four hits to lead the Mustangs to a 4-0 win on April 17 at MCHS.

McDonald County got on the scoreboard in the third on singles by Stoutsenberger, Micah Burkholder and Dowd.

The Mustangs added a pair of runs in the fifth on singles by Roessler and Brown and a sacrifice fly by Dowd.

McDonald County's final run came in the sixth on a hit batter and a triple by Stoutsenberger.

Stoutsenberger had two hits to lead McDonald County, while Shaver, Dowd, Brown, Moore, Platter, Burkholder and Roessler all had one each.

Rogers Heritage scored three runs in the first inning and held on for a 5-3 win on April 20 at MCHS.

McDonald County got on the board in the bottom of the first on singles by Shaver and Brown.

Rogers added single runs in the third and fifth, while the Mustangs managed a run in the fourth on a walk and Stoutsenberger's double and a run in the fifth on Black's pinch-hit single, a hit batter and a pair of walks.

Shaver led the offense with two hits. Brown, Stoutsenberger, Black and Roessler had one each.