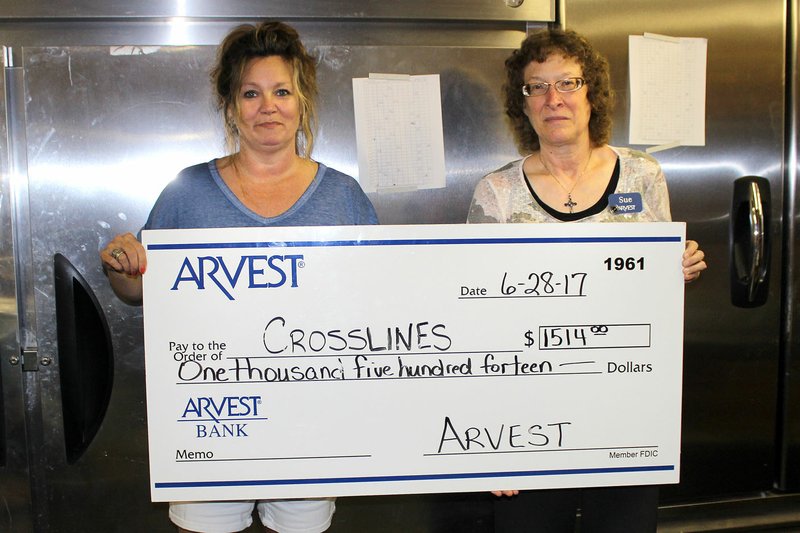 MEGAN DAVIS MCDONALD COUNTY PRESS/Crosslines Director Angie Martin (left) accepts a check in the amount of $1,514 from Sue Willman (right) of Arvest Bank in Anderson. The proceeds are a result of the recent Million Meal Campaign held by Arvest branches in Noel and Anderson.

Arvest Bank launched its annual 1 Million Meals initiative to fight hunger in the four-state region the bank serves two months ago. On June 27, the bank announced that, with the help of customers and community members, it has exceeded the campaign goal by raising a total of 1,881,283 meals in the fight against hunger.

"We are thrilled to be able to provide -- thanks to the hard work and generosity of our associates, customers and community members -- these meals to our neighbors in need," said Tara Cosgrove, McDonald County Community Bank President of Arvest. "We also hope 1 Million Meals has increased hunger awareness in (our area), and we remain committed to fighting hunger in our community long after this year's initiative has ended. I am proud, and humbled, by our success."

In McDonald County, Arvest partnered with Crosslines of McDonald County for the campaign. The organization received all local donations, and this year 8,900 total meals were provided in McDonald County. All money and food items raised through this campaign directly benefited more than 70 different organizations feeding local communities in Arkansas, Kansas, Missouri and Oklahoma.

Launched in 2011, Arvest's 1 Million Meals campaigns have raised a seven-year total of 11,485,468 meals, which includes more than $2 million in funds given directly to the bank's dozens of local food partners.

This year's campaign total of 1,881,283 meals was made possible through donations from the bank, Arvest associates, customers and community members through fundraisers, events and nonperishable food drives in all Arvest branches throughout April and May. With summer here, the success of the campaign is especially meaningful because many schoolchildren will be without the meals they ordinarily receive at school.

The bank's decision to provide one million meals was based on the fact hunger is an issue in every community it serves. In 2015, more than 12 percent of American households surveyed were food insecure, meaning they lacked access to enough food for an active, healthy lifestyle for all household members.