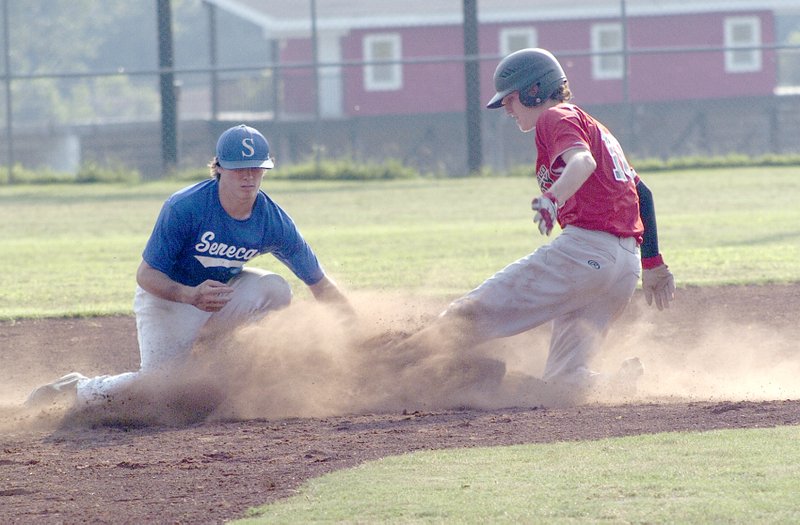 The McDonald County 18 and under summer baseball team went 2-1 last week after splitting a doubleheader at Lamar and claiming an 11-0 win over Seneca at McDonald County High School.

Against Seneca on June 29, Mason Hendrix scattered seven hits over six innings while striking out 10 to lead McDonald County to the win in the nine-inning contest. Tyler Sellers went the final three innings, allowing two hits and striking out two.

"Our pitchers threw strikes for the most part," said coach Skyler Rawlins. "Mason didn't walk a batter and we only had two walks in nine innings. Tyler had a little trouble when he first came in, but he finished strong."

McDonald County broke on top by scoring a pair of runs in the bottom of the first. Emitt Dalton and Emanuel Baisch walked to open the game. Brock Burnett followed with an RBI single for the first run before Baisch scored the second on a wild pitch.

McDonald County added a run in the third when Dalton walked and scored for the second time on an RBI single by Burnett.

In the fifth, Burnett drove in two runs with a double following a walk to Hendrix and a base hit by Austin Davis.

McDonald County broke the game open in the sixth, taking advantage of four walks to score five runs on hits by Davis, Baisch and Victor Payne.

McDonald County's final run came in the seventh on a single by Sellers, a hit by pitch and an error.

"Brock Burnett continues to swing the bat well," Rawlins said. "He has had a good summer with the bat. Victor Payne and Davis both had a couple of hits and Emanuel (Baisch) had a big hit in the sixth to break the game open."

Burnett finished with three hits while Payne and Davis both had two to lead McDonald County's 10-hit attack. Baisch, Sellers and Dagan Stites had one hit each.

Lamar claimed a 7-0 win in the July 2 seven inning game before McDonald County bounced back to take a 4-3 win in the five-inning nightcap.

Sellers took the loss in the opener, going four and a third innings with Lakota Rose working the final inning and two-thirds in relief.

The game was scoreless through the first four innings before Lamar took a 1-0 lead in the bottom of the fifth. Lamar scored six runs in the sixth to clinch the win.

Burnett had a pair of hits and Davis one to lead the McDonald County offense.

In the second game, McDonald County scored three first inning runs on the way to a 4-3 win. Trenton Frazier pitched the first two innings, followed by Davis for the next two and Stites in the fifth.